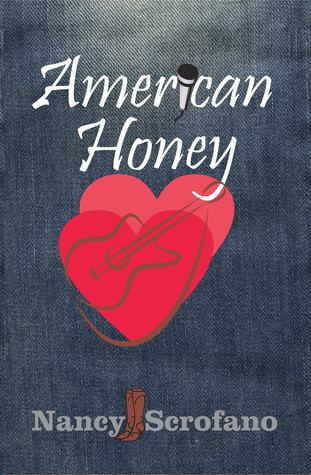 New Adult has become the latest trend in the book world. These stories feature protagonists who are in their late teens/early twenties, are out of high school, and are trying to navigate the real world. Right now these books seem to be stuck on sexy, angst-ridden stories and, while some of those stories can be good, I'm sort of tired of the norm. Enter American Honey, Nancy Scrofano's latest novel. This is the kind of New Adult title I want to read!


After graduating high school, Olivia “Ollie” McKenna leaves her small town roots in Summerville, Georgia, to pursue her dream of becoming a professional singer. With her best friend and older sister in tow, wholesome Ollie travels to the big city to compete in singing contest Atlanta Idol. There she meets nineteen-year-old Jack Bradley, a fellow country singer who quickly becomes a close friend. The connection between them is magnetic and an opportunity to sing together could change their lives forever. But what about Ollie's mama's fear of the music business? She's been burned by the lures of the bright lights before and doesn't want Ollie anywhere near that world. And Ollie's growing feelings for Jack as more than just a pal could ruin everything. Despite her own doubts, Ollie is determined to win. Can she make her dream come true or will she return to her hometown empty-handed and brokenhearted?

I've been craving stories about characters who are out of high school but still haven't figured out their lives for awhile now. This is why I was so excited when New Adult became a thing. However, like I said, these books all seem to follow a similar format - at least the ones that are getting all the attention - and they aren't doing a whole lot for me. I was so happy when Nancy told me she was writing a NA novel that was going to be more contemporary and chick lit-like in feel. I think she did a really great job in capturing the emotional ups and downs Ollie would have been feeling. She's at a very sensitive point in time - she should be leaving the nest and following her own dreams but she still feels like she needs her mama's approval for everything. The feelings Ollie had really came through the writing and I was very happy about that.

The best part about this book was reading about Ollie and Jack's journey into the music business. I may not watch singing competition shows but that didn't stop me from thoroughly enjoying this part of the story. Every time Ollie and Jack moved on to the next round, the stress and emotions were heightened and Scrofano did a great job of making sure I was feeling those emotions as well. I was totally rooting for them and was really happy with the way their careers ended up.

There were a few things that kept me from absolutely loving this novel, unfortunately. I felt like the musical/career portion of the story was so strong but all the other, smaller, storylines just didn't measure up. Or even add up. I felt like there were too many little plot holes and not enough explanation. This feeling is probably magnified because I didn't really like the ending. There were way too many loose strings and I needed more of them tied up. I honestly turned the last page and said, "Seriously?" I found it very odd that Scrofano chose to end it when and how she did. Having a few more scenes before the final one would have made it almost perfect. (Update: I've learned that American Honey will be the first in a series so that explains the really unresolved ending. Phew! And yay! more books about Ollie and Jack!)

I really wanted Ollie and Jack to get together, romantically. I appreciated the "Will they? Won't they?"...to an extent. I needed proper resolution and I don't feel like I got it. Of course, I think this is one of those personal opinion things. I can handle vague endings, sometimes, but this was a time when I wanted to know for sure how they were feeling and what they were going to do about it. It was still really sweet to read as the two tried to work out their feelings for each other.

While I didn't love American Honey as much as I'd hoped, I still enjoyed reading Nancy Scrofano's latest novel. Country music fans, American Idol fans, and chick lit fans will all enjoy this book. Make sure you check back on Friday for my Q&A with Nancy!

And for those of you who, like me, didn't realize that American Honey is an actual song (by Lady Antebellum), here's the video. Enjoy!

*A copy of this novel was provided by the author in exchange for an honest review.*
Posted by Books Etc. at 6:09 AM