Taking It Off the Shelf: The Meryl Streep Movie Club 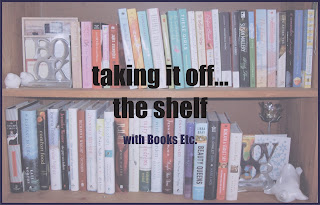 The Meryl Streep Movie Club came out in June of 2012 and I've had it sitting on my shelf since about then. My birthday is in late May so I would have noted that Mia March's debut novel was being released the next month and I earmarked birthday money/gift cards to go towards it. It's taken me forever to get to it (that's the life of a book blogger) but I'm so glad I finally gave it a chance. It was an absolutely wonderful read. 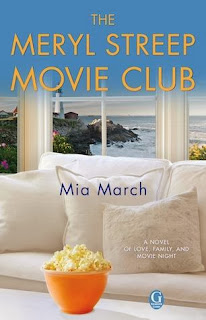 
In the bestselling tradition of The Friday Night Knitting Club and The Jane Austen Book Club, three women find unexpected answers, happiness, and one another, with Meryl Streep movies as their inspiration.
Two sisters and the cousin they grew up with after a tragedy are summoned home to their family matriarch’s inn on the coast of Maine for a shocking announcement. Suddenly, Isabel, June, and Kat are sharing the attic bedroom – and barely speaking. But when innkeeper Lolly asks them to join her and the guests in the parlor for weekly Movie Night – it’s Meryl Streep month – they find themselves sharing secrets, talking long into the night . . . and questioning everything they thought they knew about life, love, and one another.
Each woman sees her complicated life reflected through the magic of cinema: Isabel's husband is having an affair, and an old pact may keep her from what she wants most . . . June has promised her seven-year-old son that she will somehow find his father, who he’s never known . . . and Kat is ambivalent about accepting her lifelong best friend’s marriage proposal. Through everything, Lolly has always been there for them, and now Isabel, June, Kat – and Meryl – must be there for her. Finding themselves. Finding each other. Finding a happy ending.

Oh, this book. It was so lovely. Just...lovely. I didn't want to stop reading it. There was something about this story that just grabbed me and wouldn't let go.

It should come as no surprise that I was most drawn to the character of Kat. She's twenty five, I'm twenty six. I can identify with her life more readily than the other, wonderful, characters, because we're at a similar stage in our life. And the other characters really were wonderful. I found I enjoyed every one of them and I was invested in every one of their lives. I don't often get that with an ensemble cast (in fact, I try not to read those too much anymore because I find I don't really like them).

If I wanted to get nitpicky, I would say that this novel needs to come with a spoiler warning. The ladies watch several Meryl Streep movies and almost every (if not all of) ending is given away. I wasn't too upset with it since some of the movies that were mentioned I haven't watched yet and probably never will but it was still a little annoying to have the ending of some amazing movies (The Bridges of Madison County, Out of Africa) spoiled for me. And as much as I loved the analyzing of the movies, those were the parts of the book that felt forced. Everything else flowed smoothly and wonderfully but it always halted a bit while they were watching the films.

I found that I really wanted to live in Boothbay Harbor. I love books set in small towns and I find that the ones set in/near Maine seem even more delightful. Someday I'll visit Maine... Anyway, the inn Lolly owns, The Three Captains' Inn, seems fantastic and I would absolutely 100% love to visit Books Brothers, the bookstore June works in. The way March wrote about the town was great and I could almost picture myself in the town while I was reading.

I can't end this post without discussing the romances in this book. Even though there was a hint of an affair in almost all of them, the relationships were all really sweet. Some might say too sweet and too perfect but I think the book needed that. There were so many heavy, family centric issues going on that having happily ever afters in the romance department was almost needed. I'm so happy with the way everything turned out, apart from the obvious tragedy, and that love and family played such an important role in this book.

Even with the little issues I mentioned, I still think Mia March has written an absolutely wonderful novel. I adored The Meryl Streep Movie Club and I think many others would as well. Since it's the season, it could be a great pick for a Christmas gift for your mom, your partner's mom, your grandma, your aunt, your best friend...I really think there's something in it for everyone to enjoy. Besides, who doesn't love Meryl Streep? I cannot wait to read Mia March's second novel, Finding Colin Firth.

Next month I'm going to read Home for Christmas by Cally Taylor. I won it in a contest earlier this year and I've been hanging onto it until this Christmas. I adore Christmas books so I can't wait to dive in!
Posted by Books Etc. at 7:08 AM

Email ThisBlogThis!Share to TwitterShare to FacebookShare to Pinterest
Labels: family, feature, Taking It Off the Shelf, The Meryl Streep Movie Club, women's fiction