Review: Crash Into You 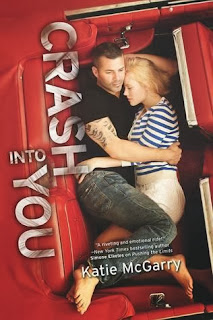 I read Katie McGarry's first novel, Pushing the Limits, and first in the series by the same name, back in early fall (review here) and I was hooked. Then, a few weeks later, I read the second book Dare You To - the book that made me want to try out this series. I was a little disappointed in it but I didn't dislike it. So where does book #3, Crash into You, fall in the spectrum? I adored it. It had all the feels and I couldn't put it down.

The girl with straight As, designer clothes and the perfect life-that's who people expect Rachel Young to be. So the private-school junior keeps secrets from her wealthy parents and overbearing brothers...and she's just added two more to the list. One involves racing strangers down dark country roads in her Mustang GT. The other? Seventeen-year-old Isaiah Walker-a guy she has no business even talking to. But when the foster kid with the tattoos and intense gray eyes comes to her rescue, she can't get him out of her mind.
Isaiah has secrets, too. About where he lives, and how he really feels about Rachel. The last thing he needs is to get tangled up with a rich girl who wants to slum it on the south side for kicks-no matter how angelic she might look.
But when their shared love of street racing puts both their lives in jeopardy, they have six weeks to come up with a way out. Six weeks to discover just how far they'll go to save each other.

As I mentioned, the second book in the series didn't thrill me. I have no idea why. This meant that I was a little hesitant going into reading Crash Into You. I didn't need to worry because I felt all the same things that I did when I read the first book. Could it be that I had high expectations when I read book #2 but not when I read #1 or #3? Perhaps. Or could it be that I'd rather read about the bad boy/good girl relationships than the bad girl/good boy one? Also possible. Whatever the reason, I ended up loving this book.

Just before I started reading it (perhaps the afternoon of) I saw a tweet from someone who said that Rachel was their favourite of McGarry's heroines. I think I have to agree. There was just something about her that made me love her and want to hang out with her as the big sister she never had. She was sweet but intensely shy and had a spark that only seemed to come out when she was around her car or Isaiah. Speaking of Isaiah, I didn't think I'd like his story as I was only lukewarm about him in the first two books. I also wasn't sure how he would be able to get over Beth. He totally won me over in this book and I found myself rooting for him to succeed - both with Rachel and in life.

As in the first two books, Crash Into You has some crazy intense stuff going on. Rachel's hiding a lot from her family and Isaiah is hiding a lot from, well, everyone. They end up getting into some serious trouble and I was honestly terrified for them - especially Rachel. Isaiah explained the danger they were in but he glossed over some of the worst repercussions. I wanted things to work out perfectly for them but, of course, McGarry toyed with me and I was so worried that things would never work out. Like I said, this book gave me all the feels - stress, anger, love, sadness. You name it, I felt it. And it was awesome.

Crash Into You was a "I want to stay up all night and finish this" kind of book for me. I could not put it down and I finished it in basically two sittings because I couldn't wait to find out what happened to the characters I had grown so fond of. I'm really excited that there will be more books in this series and that Katie McGarry's next book will be about Rachel's brother, West. (Goodreads tells me it's called Take Me On and it'll be released in May.) If you want a good, emotional YA read, I definitely recommend picking this book up!

*A copy of this novel was provided by the publisher via NetGalley in exchange for an honest review.*
Posted by Books Etc. at 6:07 AM