CLP Blog Tour: Zoey and the Moment of Zen 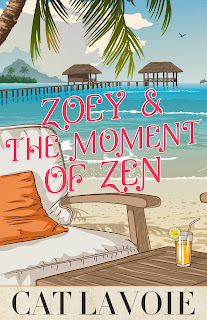 
When coffee shop owner Zoey Everwood takes her obsession with ex-boyfriend Braden too far, everyone—except Zoey—is convinced a bit of fun in the sun at the Moment of Zen Wellness Resort will help her get over him once and for all.
But Zoey's relaxing vacation turns out to be anything but peaceful when she meets Shane Lawson, a resort guest who bears a striking resemblance to Braden. And things get even more complicated when the resort's owner starts spilling secrets about Zoey’s aunt Nessa, the woman who raised her. Add a snarky Wellness Coordinator and Nate Holmes—Shane's grumpy friend—to the mix, and you've got the recipe for a perfect tropical storm.
When Zoey comes back home with a new husband instead of tacky souvenirs, she must convince everyone she hasn't completely lost her mind. As Zoey and Shane struggle to keep the magic alive outside the resort, Zoey discovers that she isn't the only one having trouble letting go of the past. And when Nate drops a bombshell that changes everything, Zoey must decide if the old saying is true—what happens at the Moment of Zen stays at the Moment of Zen.

One of the things I love about Cat's work, and other great chick lit, is that her characters don't always do exactly what you want them to. They're not perfect and their decisions can be questionable but this is what makes them so great. In the case of Zoey, the title character is still hooked on a guy who is clearly not right for her. As much as I loved Zoey, I wondered why on earth she was still in love with this dude and then why she thought it'd be a good idea to get hitched while on a forced vacation. I had faith in Cat, though, and I knew that everything would work out as it should.

I liked that we get to see Zoey grow as a person. She's not totally screwed up or annoying (like some chick lit characters you might find) and her major issue, still being hung up on an ex who is no good for her, is one that a lot of people could understand. Watching her realize she was finally over her ex and that her actions have been slightly crazy was really enjoyable. It also helped that Zoey was just such an awesome character. I want to be her friend!

It wasn't just Zoey who had to face some tough scenarios. Cat has once again written some excellent secondary characters. Zoey's best friends, Dar and Dex, seem to have a picture perfect marriage (they're actually so adorable it's almost nauseating!) but is it all as it seems? And Zoey's aunt Nessa has apparently been keeping a huge secret from Zoey for almost her whole life. The side stories help add even further depth to the novel and it really showed that Zoey had a great support system.

The romances (yes, plural) in this novel were really interesting to read about. I think that's in part due to the fact that the males were so different. I'm thrilled with the choice Zoey made but Cat made me wait until the very end before revealing who Zoey would choose to be with. I was so worried Zoey wouldn't do what I wanted her to do! :) I do have to say that I think I wanted just a bit more leading up to the end choice. As much as I wanted it, I think there needed to be more clues or indicators that they'd end up together. Hopefully that was vague enough that I didn't give anything away but not so vague that you have no clue what I'm talking about!

Cat Lavoie has another winning novel on her hands with Zoey & The Moment of Zen. I think this book is one that all chick lit lovers will enjoy and I'm sure everyone will love Zoey and her story as I did. Besides, who can resist that gorgeous, summery cover now that winter's coming? :)