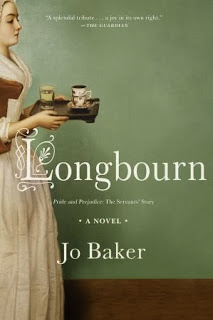 It's not often that I'll allow myself to have (ridiculously) high expectations of a novel. When you start to expect something out of this world amazing you start to set yourself up for disappointment. I think I set the bar too high for the newly released Longbourn. I expected too much from it. Jo Baker's novel was well researched and well written but I found myself feeling only so-so about it as I read it. I enjoyed it as a whole but trying to put my finger on what it was that let me down has been a frustrating process.


Pride and Prejudice was only half the story.If Elizabeth Bennet had the washing of her own petticoats, Sarah often thought, she’d most likely be a sight more careful with them.
In this irresistibly imagined belowstairs answer to Pride and Prejudice, the servants take center stage. Sarah, the orphaned housemaid, spends her days scrubbing the laundry, polishing the floors, and emptying the chamber pots for the Bennet household. But there is just as much romance, heartbreak, and intrigue downstairs at Longbourn as there is upstairs. When a mysterious new footman arrives, the orderly realm of the servants’ hall threatens to be completely, perhaps irrevocably, upended.
Jo Baker dares to take us beyond the drawing rooms of Jane Austen’s classic—into the often overlooked domain of the stern housekeeper and the starry-eyed kitchen maid, into the gritty daily particulars faced by the lower classes in Regency England during the Napoleonic Wars—and, in doing so, creates a vivid, fascinating, fully realized world that is wholly her own.

I do think Pride and Prejudice fans would enjoy this. It's important to note, however, that the Bennets and friends are not the focus of the story. At least, not in the way that a lot of people might want or expect. The novel isn't set up like Downton Abbey where you see both upstairs and downstairs equally. You only see the upstairs when the servants are there. Everything is seen through their eyes - and I liked that. We didn't need anything more because we (at least the people who have read Pride and Prejudice) already know the upstairs story. This allows us to fill in some blanks. I liked that we got to see how the servants would have interpreted the goings on at Longbourn. Did you ever think about how their lives would be changed once Mr. Bennet died and Mr. Collins took over? I never did. This novel makes you realize how dependant the servants are on their masters. I liked knowing what was happening inside while James was waiting outside Netherfield in the carriage or upstairs when Lady Catherine de Bourgh sweeps into Longbourn. These parts of the novel, the adding to Pride and Prejudice, were nice to read about - if slow in the beginning.

I had some trouble determining exactly how much time was passing, especially near the end of the book. It was easy when the servants' story was running parallel to the story we know so well from Pride and Prejudice but once it went beyond the end of that novel I was quickly confused. I want to give examples to show why it was confusing but that would give away the end of the story! It's really not a huge deal but it distracted me a bit from the conclusion and bothered me enough that it warrants a mention.

I liked Sarah, the maid who serves as the heroine in this story. I was invested in her life and wanted only the best for her. There were other little stories that captured my interest as well but were slow to get really moving. We don't know exactly what James' story is, nor do we know why Mrs. Hill seems agitated (though I correctly guessed the reason). Even though I was glad to find out exactly what had happened to James, I wish there had not been 40+ pages devoted to explaining it. The history of it was mildly interesting but I didn't feel like it did anything for the story as a whole. The Mrs. Hill storyline contained a big shocker that Austen fans will probably really dislike because it paints a beloved Pride and Prejudice character in a less than favourable light.

Overall, I liked Longbourn. I didn't love it as I expected to and that probably coloured my review. I think if you go into reading Jo Baker's novel expecting a good story with an interesting and new take on Jane Austen's Pride and Prejudice you'll probably quite enjoy it. There may be things that irk you, as they did for me, but it is a good story. I just think it could have been a little better. For those of you who have read this one already, what did you think of it? I'd love to hear what you thought!

*A copy of this novel was provided by the publisher, Random House of Canada, in exchange for an honest review.*
Posted by Books Etc. at 10:41 AM