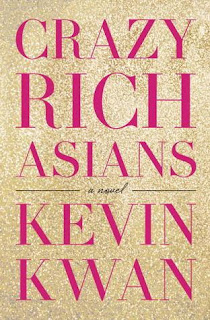 Every once and awhile a book will come along that completely surprises me. Crazy Rich Asians was one of those books for me. I had been hearing great things about Kevin Kwan's debut novel for months because of my internship at Random House but wasn't sure how I'd feel about it. It turns out I thoroughly enjoyed it and didn't want to put it down! Fun story: I actually got the chance to (briefly) meet Kwan when he was at the RHC offices in Toronto earlier this year.


Crazy Rich Asians is the outrageously funny debut novel about three super-rich, pedigreed Chinese families and the gossip, backbiting, and scheming that occurs when the heir to one of the most massive fortunes in Asia brings home his ABC (American-born Chinese) girlfriend to the wedding of the season.When Rachel Chu agrees to spend the summer in Singapore with her boyfriend, Nicholas Young, she envisions a humble family home, long drives to explore the island, and quality time with the man she might one day marry. What she doesn't know is that Nick's family home happens to look like a palace, that she'll ride in more private planes than cars, and that with one of Asia's most eligible bachelors on her arm, Rachel might as well have a target on her back. Initiated into a world of dynastic splendor beyond imagination, Rachel meets Astrid, the It Girl of Singapore society; Eddie, whose family practically lives in the pages of the Hong Kong socialite magazines; and Eleanor, Nick's formidable mother, a woman who has very strong feelings about who her son should--and should not--marry. Uproarious, addictive, and filled with jaw-dropping opulence, Crazy Rich Asians is an insider's look at the Asian JetSet; a perfect depiction of the clash between old money and new money; between Overseas Chinese and Mainland Chinese; and a fabulous novel about what it means to be young, in love, and gloriously, crazily rich.

I was addicted to this story. There's really no other way to put it. It was funny without being a comedy and it was dramatic without being serious. My friend and I were trying to put a label on it (because apparently that's what readers need to do) and we couldn't find a subgenre for this book to fit into. I really haven't read a book like this before and I think that's what made it so awesome. I liked that there was a bit of everything in this book. There was love, romance, and weddings. There was family and the drama that inevitably comes along with it. Then there were also friends and frenemies and all kind of hijinks (there were bachelor and bachelorette parties during this book - of course there were hijinks!). Everything was balanced and the story was told well.

There's some minor confusion with trying to keep the families straight and figuring out who was related to who but the family tree at the beginning of the book really helped. My same friend also pointed out that it was fine that we were confused by the family relationships because Rachel was also confused. She made a great point. Usually things were spelled out for Rachel because she had no idea who was who and that meant that we, the reader, were also given more info and time to figure out the connections.

I liked that we got to see behind the scenes of many different family members. The core story was Nick and Rachel's but getting to see how others were living their crazy rich lives, was really interesting. Having this insider knowledge really helped me understand why some of the characters were acting the way they were. True, some of them were kind of completely nuts and I didn't get why they were being so cruel, but at least I had all the info on their motives. Having the spotlight on other people helped create a really well rounded story.

If you're looking to read at least one fabulous book this summer, make it Crazy Rich Asians. Kevin Kwan's novel has everything you need for a great summer book and I think it's one that everyone can enjoy. And after reading this Entertainment Weekly interview, I'm really hoping he does decide to turn this into a trilogy!