Welcome the sixth month of the I Eat Words Sarah Dessen Read/Reread Challenge! Check out this post that explains the details about the awesomeness that is this challenge. We're going way back in time with this month's read. That Summer was Sarah Dessen's first novel and it was very interesting to read it after reading her latest. Read on to see what Sandy and I thought of this one.


For fifteen-year-old Haven, life is changing too quickly. She's nearly six feet tall, her father is getting remarried, and her sister—the always perfect Ashley—is planning a wedding of her own. Haven wishes things could just go back to the way they were. Then an old boyfriend of Ashley's reenters the picture, and through him, Haven sees the past for what it really was, and comes to grips with the future.

Main  Character: Haven
Age: 15
School Year or Summer?: Summer
Boy: Sumner Lee
First description of the boy: "He was skinny and smooth, with black curly hair and bright blue eyes that almost didn't seem real. He lad a long, lazy Alabama accent and wore tie-dyes and beat-up Converse hightops that thwacked when he walked." (page 310)
Crushable?: Possibly but that's not really the point of this novel.
Big Secret?:  There's a secret but it wasn't meant to be a secret and it only matters to Haven.
Heavy Storyline?: It's not heavy, exactly, just a ton of things happening that are the End of the World when you're fifteen.
Parents Together?: No - divorced.
Sibling(s)?: Yes, an older sister, Ashley (21)
Takes Place In: Lakeview
Cameos: None, since this was Dessen's first novel. Though you'd recognize Lakeview Models from Just Listen.

About the Book
Released: 1996.
Epigraph?: No, but there is a poem. "At Every Wedding Someone Stays Home" by Dannye Romine Powell
Format (of the copy I read): Paperback AND it's the How to Deal double book that also has Someone Like You. (If you didn't already know, That Summer and Someone Like You were put together to make the movie How to Deal from 2003 starring Mandy Moore)
Own?: No. This is the only one I don't own and I was a very good girl and didn't spend my money on it because my sister owns it.
Signed?: No.
Read or Reread: Reread
Age when first read: Not really sure...15 maybe?
New cover vs older cover: New.

My Thoughts
This was the second Sarah Dessen novel I ever read which means I read it eons ago. I always like to think that I started reading Dessen super early on but then I remember that four of her books were already published before I stumbled across Someone Like You when I was 14 or 15. Clearly I'm not as ahead of the game as I like to think I am!
I went into reading That Summer expecting not to like it. I had this idea in my head that it wasn't any good but I was wrong. Sure, it's not as good as her later novels but that's because, by now, she's had a ton of practice publishing excellent YA novels. That Summer reminds me why I love Dessen. It's not because her books are full of teenage romance, like other amazing contemporary YA novels. It's because her characters are real and they deal with things that make them grow up and continue on their teenage journey. The books are about finding yourself - as much as you can when you're a teen.
Haven is one of the youngest Dessen characters you'll encounter, if not the youngest. At fifteen she hasn't really experienced much but she's had a bit of a brutal year. We know right from the first page that her parents are divorced and her father is getting remarried - to a woman just five years older than her sister. That same sister is getting married herself later in the summer and the five year age gap between Haven and Ashley seems very pronounced. She's also reconnected with Sumner, a boy Ashley dated five years ago. Haven thought he was the best and always thought her sister made a mistake by breaking up with him. Of course, you never know the full story of a relationship unless you're in it and Haven has a lot to learn about love.
A couple of quick, interesting to note, type things. First, I like that this book took place in Lakeview - the setting of so many of Dessen's other novels. It feels more cohesive this way. Second, there were a couple of instances where I was reminded that this book was written in the '90s with very amusing and dated references (Walkman, anyone?).
I remembered right away that I really identified with Haven when I first read this book. I was around her age when I read it, also had parents who were divorced (though I was much younger when my dad got remarried), and was just as tall. Haven had just reached 5'11" when the story starts. I hit that height around fifteen or sixteen, too (I stopped growing a year or so later after I hit 6'0") and can remember feeling pretty awkward, just like Haven. I was all angles and felt like I didn't fit anywhere (sometimes I literally didn't fit places). Luckily for me, I was a basketball player and it's good to be tall in that world. I can also remember thinking everything was a Very Big Deal when I was that age and Haven reflects that.
Finally, I have to share the opening paragraph of That Summer. I think it's just perfect (and also helped me mark off another Reading Bingo square!): 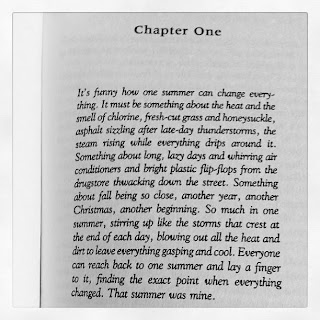 I'm happy that I ended up liking That Summer more than I thought I would. Now I don't think I'd have a problem telling people to just start at this one, her first, and work their way through chronologically. It's the best way to read them, really, because you pick up on all the cameos that I love!

Another Dessen novel down and another smile on my face. That Summer was Dessen’s first novel and it sets the tone beautifully for her tenure into Young Adult fiction. Every line is quotable and the writing is fantastic. From beginning to end it is the quintessential coming of age tale. Our heroine is Haven, a fifteen-year-old girl struggling with the changes one particular summer is bringing to her life. Her dad is with another woman, her sister is getting married, and a boy she thought she knew reappears to prove otherwise. It is one change too many for Haven to handle so she loses herself in memories of a happier summer from her past. Everything in her life begins to lead back to that summer and the boy that brought her family together. Sumner is an amazing character and though I found myself really having to focus on not calling him Summer I enjoyed the confidence and daring that he brings out in Haven.
Because she is so tall, Haven feels like she should hide herself, not garner any more attention than she already gets just because of her height. When Sumner comes back into her life he changes her perspective of everything as he had when she was eight. She remembers the sister of her childhood, before the bride, her father before his second marriage, and her mother before the divorce. She also remembers herself and how it felt to be just a kid sharing some time with family. In the summer before her, all of that familiarity seems to be disappearing.


The resentment she feels over all of the changes being forced upon her finally comes to a head and Haven finds herself growing up rather quickly. She is no longer that innocent eight-year-old and the world is no longer innocent either. Everything changes in that summer and Haven will never be the same again. She learns that things don’t always turn out the way you expect them to (a common Dessen theme), but that isn’t always a bad thing. Change is good. Change is healthy. Letting things go, moving on and being comfortable with yourself is a valuable lesson of adolescence.

Next month: Up next is Along for the Ride. I'm really excited about this one because it's one of my favourites.
Posted by Books Etc. at 2:05 PM

Email ThisBlogThis!Share to TwitterShare to FacebookShare to Pinterest
Labels: challenge, debut, How to Deal, I Eat Words, Sarah Dessen, That Summer, young adult