Time for another tour stop! About a month ago I showed you the large (and full) shelf that still resides at my mom's place. Today I'm showing you one of the large bookshelves I have at my own house. Someday I'll have enough space for all of my books in one place. Maybe in my next place! 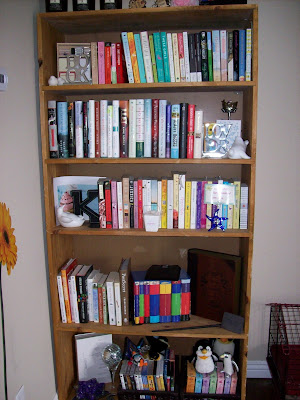 This is my bookshelf in all of its glory. Complete with TV seasons on DVD, a few movies, and Tonks' cage beside it. Speaking of Tonks, the bookshelf now has her personal touches on it as she's nibbled the bottom right part of the shelf. Nothing like a few bunny chew marks on a bookshelf! I was OK with it (it's wood, it won't hurt her, and I'd rather her chew that than the trim on the wall) but the boyfriend was not as appreciative as he actually made this shelf back in high school. Ah well. We love the bunny too much to be too mad! In case you're curious, the TV shows include Gilmore Girls, Sex and the City, Bones, House, Glee, and The OC. The movies hanging out over there with the penguins, are my kiddy movies - Cinderella, The Baby-Sitters Club, Cars, Tangled, etc. - and Christmas movies - The Holiday, Love Actually, Polar Express, and so on. 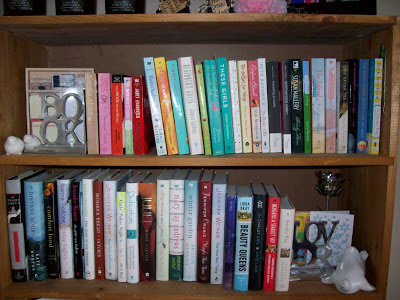 These two shelves are full of books that I really want to read. I've had a lot of them for ages but just haven't had time to read them. This is why I started my Taking It Off...The Shelf feature. I can pretty much tell you when and where I bought each of these books, which were purchased with my staff discount when I still worked at the bookstore, and which were won, freebies, or gifted. I won't bore you with that though! The only books on these shelves that I've read are Beginner's Greek, The Night Circus, and Best Friends Forever. Yep, there are a lot I still need to read. There are so many that I can't wait to get to...both of Beth Kendrick's, These Girls, Juliet, The Next Best Thing, and The Meryl Streep Movie Club, just to name a few. The Devil Wears Prada will be finally read soon (I've only seen the movie) but I have Revenge Wears Prada on its way (a giftcard + just $15 for the hardcover + free shipping = a no-brainer!) Finally, Girls in White Dresses is my next Taking It Off pick. If you want to know some of the other titles (because the picture isn't that great, sorry) just leave a comment and I'll clear things up! 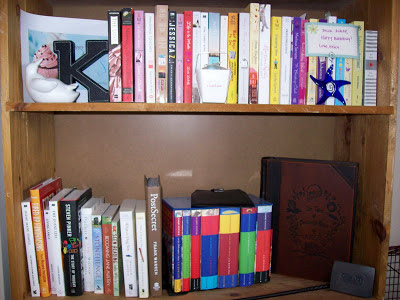 The top shelf in this picture is my random paperback shelf. These are ones that I obviously want to read, since I own them, but don't have high priority (sorry to the authors on this shelf!) The second shelf holds my non-fiction titles. Between the boyfriend and I, we own most of Malcolm Gladwell's titles (the only one we're missing is Blink) but I have yet to read any. I've been meaning to read Becoming Jane Austen since the movie came out ages ago and I really want to get to my won copy of Seen Reading. You'll also notice that this shelf features my Harry Potter books. The set was a combo birthday gift from myself and my mom a few years ago. I haven't actually read my copies yet but I had lent the first three to my former boss. I couldn't believe I was doing it, and it pained me greatly, but she had never read them and I thought that was a greater travesty than lending out my virgin books! My boyfriend got me that gorgeous The Tales of Beetle the Bard set you see there as a gift many years ago. The book is all fancy-fied and there are separate illustrations included. You can also kind of see that I have a wand there. That's Ginny's wand that I bought on my trip to Universal studios last year, because I'm super cool like that.

So there we have it! Tour stop number two has come to an end. I have one more big shelf to showcase as well as a couple of shelves of books that are still residing at my mom's. I've brought so many to her in the last few months that the picture my sister took for me awhile ago is no longer up to date. I'll be there at the end of the month so I'll update the pic and share them with you next month! I hope you enjoyed this little tour :)