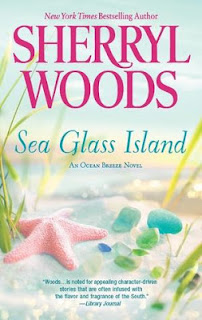 I had been looking forward to the final novel in Sherryl Woods' Ocean Breeze trilogy because I had enjoyed the first two books so much. Sea Glass Island was a great wrap up to the series and I loved reading it.


With her two younger sisters heading for the altar, will Samantha Castle exchange old dreams for new ones? Lately she'd rather be on the North Carolina coast with family than in New York with agents and actors. Though she vows not to let her teenage crush on Ethan Cole influence her decision, it's hard to ignore her feelings for the local war hero.
Ethan lost more than his leg in Afghanistan. He lost his belief in love. Even being surrounded by couples intent on capturing happily-ever-after won't open this jaded doctor's heart. It's going to take a sexy, determined woman—one who won't take no for an answer.

I was really interested in seeing how Samantha's story would play out. Ethan was her teenage crush and up to this point, she hasn't had any interaction with him. I didn't find that odd though. They hadn't had any reason to cross paths, even though he was best friends with her younger sister's fiance. The only thing that seemed strange was that the meddling didn't start until now. Of course, that wouldn't make sense in terms of the trilogy so it's easy to overlook! Anyway, I had no idea how Samantha and Ethan would interact and I liked that. All too often there aren't any surprises in a final book in a series like this. I loved reading along and watching as Samantha and Ethan tried to ignore their growing attraction for each other.

This wasn't just a romance novel. Like the other two novels, there was some soul searching required on behalf of the main character. Each sister had to truly think about what she wanted in life, and in love, before she was able to be happy at the end of the novel. In Samantha's case, she had to decide if she wanted to give up her whole actress-in-New-York lifestyle. It was nice to have something else going on other than just the romance - even though this one was a really fun love story to read about!

There's not much else I can say about this series that I haven't already said in my reviews of Sand Castle Bay and Wind Chime Point (links lead to my reviews), though I do think Samantha was my favourite! I definitely recommend Sherryl Woods' Ocean Breeze Trilogy to anyone looking for a sweet and enjoyable romantic read this summer. All three books are now published so no need to wait for another to be released! Go check them out and enjoy.