Welcome to month three of the I Eat Words Sarah Dessen Read/Reread Challenge! Check out this post that explains the details about the awesomeness that is this challenge. This month we read Dreamland, a novel that I didn't really like when I first read it. Would my opinion change with this reread? Read on for the thoughts of myself and my best friend, Sandy.


Wake up, Caitlin
Ever since she started going out with Rogerson Biscoe, Caitlin seems to have fallen into a semiconscious dreamland where nothing is quite real. Rogerson is different from anyone Caitlin has ever known. He's magnetic. He's compelling. He's dangerous. Being with him makes Caitlin forget about everything else--her missing sister, her withdrawn mother, her lackluster life. But what happens when being with Rogerson becomes a larger problem than being without him?

About the Story
Main  Character: Caitlin O’Koren
Age: 16 (It’s her birthday when the story starts)
School Year or Summer?: School year
Boy: Rogerson Biscoe
First description of boy: “He was standing next to the black BMW, arms crossed, looking down at the car.  He was in a short-sleeved shirt with a kind of tribal print, and old khaki pants with worn cuffs. His hair was brown , a mass of curls, thick enough that they were almost like dreadlocks, and he had a dark, olive complexion. He wore a leather cord necklace around his neck and penny loafers with no socks on his feet.” (page 50)
Crushable?: No. Not to me. But the sad fact is that guys like him are crushable to so many girls and women.
Big Secret?:  Oh yeah.
Heavy Storyline?: Yes.
Parents Together?: Yes.
Siblings: One sister, two years older.
Takes Place In: Lakeview
Cameos: None that I could find.

About the Book
Released: 2000 (which I got from the copyright page, everywhere online says 2004)
Epigraph?: No.
Format (of the copy I read): Paperback (new cover)
Own?: Yes (as of a few weeks ago!)
Signed?: No.
Read or Reread: Reread
Age when first read: Probably 15. This was a catch up on, I think, as when I discovered Dessen, she had already published this one.
New cover vs older cover: I think I like the new cover more, which is good. I wouldn’t have bought it if I hadn’t liked the cover!

My Thoughts
This is probably Dessen's heaviest novel. Just Listen (which we've already read and reviewed) comes close but I think Dreamland "wins" because we actually see the abuse taking place. (I didn't want to give that away but I feel like I need to to really give a good review.) I remember not really liking this one when I first read it. I wonder now if it's because I just didn't get it. Part of that may be because I was so naive but maybe I also just didn't get why Caitlin, or anyone, would want to stay with an abusive guy. I think Dessen did a good job of showing the realities without glamourizing it (is that even a word? We'll say it is.)
I found that there were some things in this book that show up in slightly different ways in later novels. For example, Caitlin doesn't understand how her older sister can be in love. She just doesn't get it. That's quite similar to Remy in This Lullaby (Dessen's next novel) but, unlike Remy, I think it's just because she's young. Also, Caitlin loves Top 40 pop music and Rogerson hates it. He likes bizarre music that features wailing and chimes. Does this sound familiar? Yep, kind of like Owen and Annabel from Just Listen (published two novels later.) Interesting to note.
Once again, I found myself playing the big sister role when reading this book. I'm a decade older than Caitlin and I wished that I could protect her. There's one quote that stuck with me so much that I snapped a picture of it. I wanted to be the one to save her. 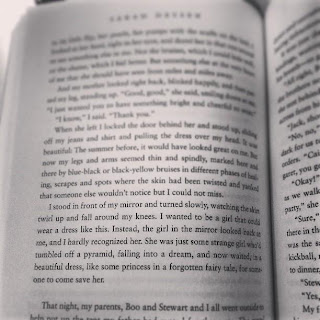 I'm really glad I gave Dreamland a second chance. I don't think it'll make the top of the favourites list but I can see how this is one of those novels that makes YA so important. Talking about real issues in a real way is important and I think Dessen did a great job of this. Keeping that in mind, if you're thinking of recommending this to a teen girl you know, make sure she's old enough and mature enough to handle the subject matter.


Dreamland was this month’s book of choice and I was once again a little leery of  re-reading. I work in a bookstore and Sarah Dessen is always my first recommendation for teen girls. However, I am always hesitant to recommend Dreamland because of its intense subject matter. After reading it for the second time I realize that in the end the message this novel shares is one of strength. Strength of heart, choice and mind. Caitlin feels weak but to others she is strong and she pulls through, even offering strength to others when needed. She is a survivor and that is an important lesson for teenage girls.
After her sister Cass leaves, Caitlin becomes transient. She focuses on being the opposite of her sister so she doesn’t have to acknowledge the loss of that sister in her life. She tries not to do what people expect of her and she loses herself in a boy, Rogerson, and the lifestyle he introduces her to. Almost from the start she gives in to what he wants her to be. By doing so she doesn’t have to deal with missing her sister and filling the void Cass left at home for their parents. Caitlin escapes into Rogerson’s world and becomes a girl she believes her sister would barely recognize.
But the bond between sisters is stronger than that and Cass makes her presence known in the Dreamland their mother taught them about. She leaves behind a journal into which Caitlin exorcises the demons that she comes across in her sister’s absence. Though Cass is living a new life she is never far from Caitlin’s thoughts.
Caitlin uses Cass’s journal and Dreamland as an escape from her reality. She spends most of the novel searching the dream spaces of her life for Rogerson, for Cass, and most importantly, herself.  From the time Cass leaves, Caitlin tries to be anybody but who she really is. She becomes a cheerleader, a druggie, and a slacker in school. When she meets Rogerson it seems like he will finally be the one to bring her out of the shadows but he just creates new ones for her to hide in.  The only good thing he brings her is Corinna, who acts like a substitute for Cass in Caitlin’s new world. For Caitlin, losing her sister means losing herself. Cass was her guidepost and throughout the novel it is through Cass’s eyes that Caitlin defines herself. In finding Rogerson and living his life she sees a different side of herself that Cass would not approve of. Cass leaving and Rogerson appearing help Caitlin find her identity, but at a price.
Dreamland is a novel that showcases the meaning of “to every action there is an equal and opposite reaction.” In the case of Caitlin, her sister leaving equals a romance with Rogerson and the consequences that relationship brings her as well. One event can impact a life drastically; it can take someone down a path they never imagined could happen. Life can become a mirage, an illusion or even a dream. Cailtin is woken up but many others never are.