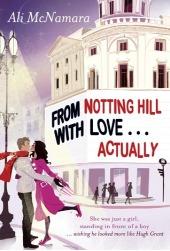 From Notting Hill with Love...Actually had been on my to be read list for ages. I had heard of Ali McNamara's novel who knows when and I was incredibly pleased when I discovered it on my library's shelf! Time to check off another spot on the Random House Reading Bingo!

Here's the synopsis for the novel:


She was a girl, standing in front of a boy...
Movie fanatic Scarlett O'Brien dreams of a life as glamorous and romantic as all the big screen flicks she worships. When a chance house-sitting job in iconic Notting Hill comes along, she knows living in one of her favorite movie settings is an opportunity too good to pass up.
Leaving behind her skeptical friends, family, and fiance, Scarlett heads to London and finds herself thrust into the lead role of her very own romantic comedy. But can real life ever be just like the movies? Larger-than-life new friends, a handsome but irksome new neighbor, and a mystery from her past may prove to Scarlett that living her life like a RomCom is more complicated than she thought!

Scarlett was definitely a little crazy and flighty but she was still fun to read about. I would definitely compare her to Becky Bloomwood from the Shopaholic series. What is it about British heroines? Is there something in the water? :) Scarlett has a bit of a problem with wanting her life to turn out like a romantic comedy. Sure, most girls would love to run into Hugh Grant in a bookstore, but that doesn't mean we're going to go out of our way to create a similar occurrence. Her friends and family try to tell her to get a grip on reality but she just will not listen. I admit, she got a little frustrating at times but I could tell that she wanted to work on herself, even if she was misguided, and she was lovable. So it worked for me.

I liked all the references to classic chick flicks and other films. It made me realize that there are a few movies I need to rewatch (I've only seen Pretty Woman once, years ago, and it's been ages since I've watched Notting Hill.) It was kind of fun to see her compare her life to the movies and I definitely wasn't as frustrated as her friends and family were.

From Notting Hill With Love...Actually is exactly what I love about British chick lit. The main characters are a little bit kooky, the language is great, and the story is so much fun. I can't wait to read the next instalment in the series, From Notting Hill to New York... Actually (also available at my library - woot!). Ali McNamara has created such a fun story and I'm really glad I got the chance to read it. This is a must read for chick lit (and chick flick) lovers! 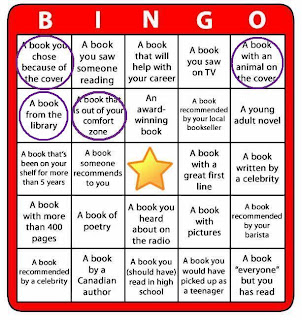