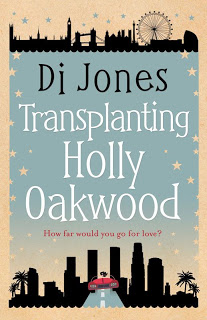 Today is my stop on the CLP Blog Tour for Transplanting Holly Oakwood by Di Jones. I'm always interested in British chick lit so I was looking forward to this one. I wasn't disappointed as the novel was cute and kept me entertained.


Finding her lover in bed with her best friend was the worst thing ever, but leaving London for Los Angeles pushed trouble to a whole new level.
Holly Oakwood’s cosy life is shattered when her boyfriend has an affair with her best friend. Determined to mend her broken heart by throwing herself into her career, but unable to hide her contempt for her new boss, she loses her job as well.
She lands a dream job in a Consulate in LA, but that’s when her troubles really begin. She struggles to settle, loneliness begins to bite, and everyone around her is thin and shallow. She loses her confidence, makes a fool of herself once too often, and her new boss hates her. Can she salvage anything from the train wreck of her new life, or should she return to England?
What ensues is a comically entertaining series of events that catapult Holly into new friendships, the promise of romance and the realization that home is where the heart is.

This was a quick read. The novel is only around 200 pages and I thought it was just enough to get to know Holly and follow her on a seemingly crazy adventure. I don't blame her one bit for picking up her life and moving to a new country. I do wish that she had been able to leave on her terms on at least the job front, though the scene where she gets fired did have me chuckling.

There was the wackiness that you come to expect from a lot of British chick lit, which was entertaining, even though the book doesn't technically take place in Britain. Now that I think about it, Holly is actually from New Zealand. So. Take from that what you will, but I can't recall being overly irritated by Holly - always a plus. :) I did wish that she and her sexy boss explained themselves a little bit more. I found myself saying, "Just talk to him and tell him the truth!" and vice versa. Why don't characters ever just talk to each other?

The lack of communication translated into the main conflict of the novel as well. Holly is a smart woman and I can't understand why she did not see how evil Brittany was and why she didn't try to push her innocence. ("Innocence for what?" you ask? Nothing too major but I don't want to give anything away!)

I liked that there were different POVs but it sort of took awhile to see how people were connected and why it mattered that I was reading things from their perspective. I can see how reading from Brittany's eyes helped connect some dots but I almost wish her POV had been left out.

Overall, Transplanting Holly Oakwood was a cute read. It wasn't one of my favourites but I am looking forward to the other Di Jones novel I have to read for an upcoming tour. If you're a chick lit fan looking for a quick and funny read, I think you'd probably enjoy this one!