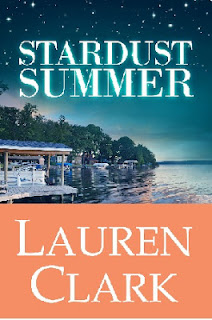 I'm so happy that I was able to take part in the ABG Reads Tour for Stardust Summer by the lovely Lauren Clark. I've read Lauren's two previous novels, Stay Tuned and Dancing Naked in Dixie, and enjoyed them both and wanted to see what her latest book was like. Happily, I ended up really liking it!


Single mom Grace Mason doesn’t believe in miracles, magic, or love at first sight. She likes the quiet life, complete with her eight-year-old son, their tiny house, and her teaching job. For Grace, happiness means that nothing much ever changes in Ocean Springs, Mississippi.
Then, one thousand miles away, tragedy strikes. A massive heart attack leaves Grace’s estranged father comatose in an Upstate New York hospital. While a team of doctors fight to keep Henry Mason alive, Grace and Evan rush to his bedside to say their final goodbyes.
Henry’s passing brings little closure for Grace, but she finds herself inexplicably drawn to her new surroundings. What begins as a short trip results in an entire summer spent with Henry’s second wife, Kathleen, and her next-door neighbor, Ryan Gordon, the town doctor. When a series of unlikely events lead to Evan’s disappearance, Grace must face her worst fears to find her son and bring him back home.
Stardust Summer explores the complexities of forgiveness, what it means to be a family, and the fabulous possibility of falling in love—again.

When I read Lauren's other novels, I liked them but wasn't in love with them. I was wondering how I'd feel about her latest but, as I mentioned, this novel surprised me in the best possible way. I was also surprised when Lauren told me, via email, that she had actually written this book several years ago and had put off publishing it. I have no idea why. It was so good.

I was so invested in the characters in this novel. I was immensely sad that Grace and her father were not able to make up before he passed away. I can't imagine the regret she would have because, deep down, she really does still love him. Henry seemed like a great man and I actually wish I could have "met" him while he was alive. But then that would have changed the story so we'll just move on... :)

I do think that Kathleen went through way too much. There were just one too many incidents and I found myself thinking "How much more can this woman take?" I didn't like the last accident, even if it was the reason Grace went back. (How's that for vague and confusing?) That last accident also felt a little disjointed from the overall tone of the novel. But this was really the only thing that didn't sit well with me from this whole book.

Grace was standoffish and almost rude but I was never frustrated with her. I knew there had to be a good reason for how she was acting, I just had to wait for the explanation I knew Clark would give me. Sure enough, I found her actions justified once I was "told" her full story.

I really enjoyed the romance in the novel. It  played a large role but was understated, it didn't take over the novel. Ryan really understood Grace and seemed to know how to deal with her issues and lack of communication. He was patient and waited while she figured out her feelings. It was sweet and I found myself hoping for a happily ever after.

Stardust Summer was a great read. It's sweet and serious and has a great "family is most important" theme. I definitely recommend Lauren Clark's latest novel to fiction lovers!

Bonus! Good news for everyone who now wants to read this book. There's a Rafflecopter giveaway with this tour! Click on the link to go to the entry page. Good luck!