Just Finished: Stuck on You 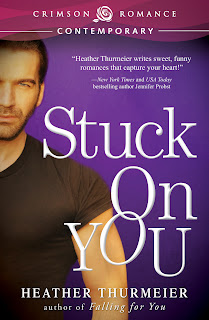 A couple of months ago I reviewed Heather Thurmeier's novel Falling for You and I just loved it (review is here if you missed it). I was so happy when Heather contacted me to review the second novel in this series, Stuck on You - especially because I think I loved this one even more!

If being forced to team up with reality TV’s favorite bad girl wasn’t enough, falling for her brother might just make this reality show a real nightmare.
Paige Anderson agrees to be on a new reality show called Treasure Trekkers, a show where contestants use handheld GPS units to find hidden caches filled with prizes, with her good friend Cassidy. But when Cassidy is unable to compete, Chip Cormack, the show’s producer, steps in with a last-minute replacement to be Paige’s partner—Zoe Oliver, reality TV’s favorite bad girl.
Jack Miles (aka Miles) is a mountain climber with the body to prove it. Miles convinced his climbing partner Ben to come on the show with him for one reason—to prove to Ben that they can still hike together, regardless of the fact that Ben lost his foot in a tragic accident. Miles isn’t about to let anything get in his way of winning—not even beautiful Paige.
But when Miles and Paige are thrown into an alliance with their teammates, working closely together leads to more than just good strategy. Can Paige steal Miles’ heart while surviving Zoe long enough to win the game?

This was such a fun premise. I love the reality show focus in this series and I would definitely watch Treasure Trekkers. I was familiar with geocaching before reading this book so I was immediately interested in how the show would play out. Of course, the show isn't the main part of the story, it is a romance novel after all!

And what a romance it was! I loved Paige and Miles and was totally rooting for them through the entire book. Even though Paige was a bit of a twit when she was following Zoe's instructions to wear stilettos while competing (OK, a major twit...what was she thinking? Ack!), you could still tell that she was a really likeable girl. I knew the two of them would eventually get together but that didn't make the build up any less fun to read.

You know when you meet a character in the first and/or second book of a series and you just really dislike her? And worry because the following book will feature said character? I felt like this about Zoe. She is...well, she's a bitch. At least, she starts out that way. We met her in Falling for You when she was competing in The One (a Bachelor-esque show) with Paige and Cassidy and then she pops up again in Stuck on You. I really disliked her. I grumbled and cursed and then...she started to grow on me. Let me tell you I was quite surprised! Heather wrote Zoe in such a way that, as I told her, made it OK for the reader to like her. You honestly go into this book disliking her and if the subtle changes in Zoe hadn't been written well, I would not have been OK with how things ended with her and where they'll go in the third book. Let me compare it to another well known chick lit character - Darcy from Emily Giffin's Something Borrowed and Something Blue. Raise your hand if you disliked Darcy in SOBO. Me too! Were you worried when you realized book two was all about her? Yep, I was too. Did it surprise you when you actually quite liked her by the end of the second book? You guessed it, I was too. Heather has also hinted at a secret in Zoe's past that may explain why she is the way she is and I can't wait to find out exactly what that is. Wow. I just realized this was a very long description of my dislike turning to like of Zoe. Obviously I'm looking forward to book three!

Overall, Stuck on You by Heather Thurmeier was a great read. It was sweet, fun, and a little sexy. I definitely encourage chick lit and romance fans to give this one a read. Especially if you enjoy reality shows as well! I will now wait (im)patiently for book three, Lost Without You, to be released...come on July!

*A copy of this book was provided by the author in exchange for an honest review*
Posted by Books Etc. at 7:11 AM