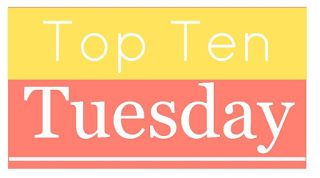 This week I have a list of ten books I resolve to read in 2013. Some are books that are being released this year, others are ones that I've been meaning to read for forever and just haven't gotten around to it yet. After compiling my list, I realized that I actually own quite a few of the books on this list so it should be easy to read them all!

Don't forget to check out their blog for a full list of everyone participating in this week's list!

The Night Circus - Erin Morgenstern
I'm fairly certain I had this book on my list of books to read for 2012. I have it on my bookshelf yet it eludes me!

Mansfield Park and/or Northanger Abbey - Jane Austen
The only Austen novels I have yet to read.

The End of Your Life Book Club - Will Schwalbe
I have heard SO many good things about this book and can't wait to finally start it.

The Moon and More - Sarah Dessen
So so so excited for this one. (Release date: June 4)

The Next Best Thing - Jennifer Weiner
Can you believe I have not read this one yet? It's another book that's sitting on my shelf waiting for me.

Sarah's Key - Tatiana de Rosnay
Another one I've heard good things about but just haven't gotten around to reading it yet.

Hidden - Catherine McKenzie
This is another novel that will be published this year. I loved McKenzie's other novels and can't wait for this one. (Release date: June 25...but I'm not sure if that's just Canada or if it'll be out simultaneously in the US)

Finding Lucas - Samantha Stroh Bailey
I've had many amusing Twitter conversations with Samantha so I figure it's high time to read her novel. I've heard lots of good stuff about it!

Austenland - Shannon Hale
This one's been out for ages (it was published in May 2008) but I haven't read it. I plan to read this one and Midnight in Austenland and then watch the TV show!
Posted by Books Etc. at 1:03 PM