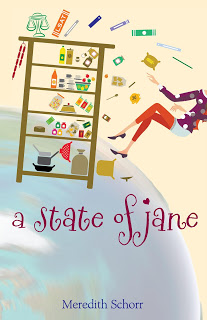 I was very excited to take part in the CLP Blog Tour for A State of Jane by Meredith Schorr. This novel was so much fun to read and it did not disappoint.


Jane Frank is ready to fall in love. It's been a year since her long term relationship ended and far too long since the last time she was kissed. With the LSAT coming up she needs to find a long term boyfriend (or husband) before acing law school and becoming a partner in her father's law firm. There's just one problem: All the guys in New York are flakes. They seemingly drop off the face of the earth with no warning and no explanation. Should she join her best friend Marissa in singlehood, making cupcakes and watching True Blood? Or should she follow her co-worker Andrew's advice and turn the game back on those who scorned her? As Jane attempts to juggle her own responsibilities and put up with the problems of everyone around her, she starts to realize the dating life isn't as easy as she originally thought.

Jane was a hilariously entertaining main character. I have to admit that it took me awhile to warm up to her simply because she was being a bit of a twit. But I really cared about her and desperately wanted things to work out for her. Then I realized that it was not the first time I had been conflicted about a heroine like this. A State of Jane has a very similar feel to the novels by Sophie Kinsella - there are well meaning (if irritating) characters, an entertaining storyline, and a lovely mix of romance and life issues. Becky Bloomwood, the main character in the Confessions of a Shopaholic series, drives me crazy but I keep reading the series because I care about her and want her to be happy. Long story short - if you're a fan of Kinsella's work, I highly recommend A State of Jane.

The only little problem I had with this novel was the ending. I finished this a little while ago and I'm still not entirely sure how things ended up. I liked that there was an epilogue but the letter from Jane didn't quite give me the closure and understanding that I needed.

I did, however, really like that Jane's life wasn't just about men and dating. Sure, the bulk of the novel focuses on her search for a non-flakey male in NYC but there's also a sub-plot of Jane studying for the LSAT and figuring out exactly what she wants in life. This is the mark of a good chick lit novel - when the heroine has more going on than romance.

Overall, A State of Jane by Meredith Schorr was an incredibly enjoyable novel. I think chick lit lovers of all kinds will also like this novel and I definitely recommend it. Now that I've enjoyed this book, I will be checking out her debut novel,  Just Friends with Benefits, a lot sooner than I thought I would! Make sure you check back in a couple of days when Meredith herself stops by with a guest post!