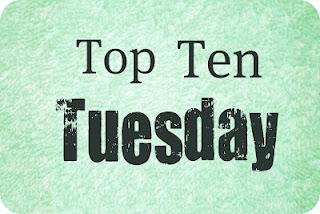 This week's list is all about the series that we haven't finished. I'm the kind of person who usually always finishes a series so I didn't know how easy it would be to come up with ten that I hadn't finished. As it turns out, there are a few (yes, ten) that I haven't finished!

Don't forget to check out their blog for a full list of everyone participating.

In no particular order...

Lord of the Rings - J.R.R. Tolkien
Yep. Haven't finished this one. I read The Hobbit and The Fellowship of the Ring way back when I was in high school and I haven't really had any desire to finish the other two. Not too sure why as I remember enjoying the books and I usually like fantasy.

Heroes of Olympus - Rick Riordan
I'm cheating a bit here as I haven't even technically started this series. This is the same world as in the Percy Jackson series but different characters and, I think, it takes place a few years after the last Percy book. I've been waiting for all of them to be released before diving in because I don't want to wait!

Katie Chandler - Shanna Swendson
I adored Enchanted Inc. and the four books that followed. The last book in the series came out in 2008 and I was so sad as I felt like there was more to come. Cue major excitement when I learned that Much Ado About Magic, the next book in the series, has been released! Can't wait to dive in.

Chronicles of Narnia - C.S. Lewis
Yet another fantasy series that I enjoyed but just never got around to finishing. I read the first few when I was in elementary school and then stopped reading them. I'm just now realizing that it may have been due to Harry Potter becoming popular...

Stephanie Plum - Janet Evanovich
Technically I'm just behind one book on this series. And it's not because I dislike it (though they're really not literary masterpieces by any means). It has more to do with the fact that I don't want to buy these books and I haven't gotten around to requesting it from my library nor have I snagged my best friend's mom's copy (a little more difficult now that she's over two hours away from me). I'll get around to it one of these days.

The Mediator - Meg Cabot
This was a series that I really enjoyed when I was in high school. I think I stopped reading them just because I grew out of it. A really enjoyable series though and, if I remember correctly, they've now been rereleased with new (and better) covers so teens now can get into them. Tell your resident teenager to read these ones!

Gossip Girl - Cecily von Ziegesar
This is another series that I grew out of. My sister borrowed the first few from a friend when I was in high school (judging from the release date I would have been in grade 10) and we devoured them during the summer. Then...I just stopped reading them. And no, I haven't watched the TV show.

Georgia Nicholson - Louise Rennison
Oh, Georgia. I freaking loved her when I was in high school. One of my best friend's, her sister, and I read every single one of these books and would often shout out the most ridiculous things because of the series. In fact, I was just at a bachelorette party the other weekend and busted out the phrase "cosmic horn." Obviously we haven't matured in 10 years :) Another series I'd highly recommend to teen girls. Now, to find the last couple of books I never read...

The Princess Diaries - Meg Cabot
Yet another series I got a bit too old for (I know you're never too old to read YA but when the final books in a series come out when you're in university and busy reading textbooks and books geared to your age group these ones kind of fall by the wayside). I love love love the movie and, quite honestly, never loved the books as much. Probably another reason I never finished it, even though I believe my sister owns every book.

Are there any series that you haven't finished? I'd love to hear your thoughts!

Email ThisBlogThis!Share to TwitterShare to FacebookShare to Pinterest
Labels: series, The Broke and The Bookish, Top Ten Tuesday