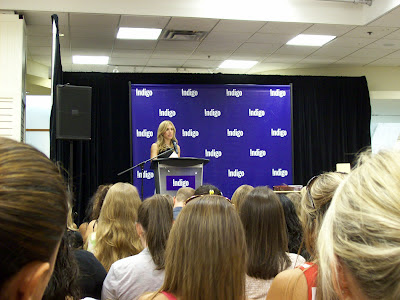 That's right my friends. I got to meet Emily Giffin!

I was so excited when I found out she'd be coming to Toronto at the end of August and knew I had to make the trip to see her - no matter what! I'm a couple of hours away so I knew it would require some planning to get there. Luckily, my coworker, who was just as excited about this event as I was, grew up in Toronto and would be able to show my small town self where to go. However...she ended up having to cancel as she had plans for the Labour Day weekend. Hm. Ok, not to worry! I decided to hook up with some of my fellow book bloggers to see if any of them would want to attend. Happy days - two of them wanted to go as well! But THEN...they both ended up having to cancel as well. Seriously?? Is there something wrong with me that no one wants to hang out with me at a super awesome signing? 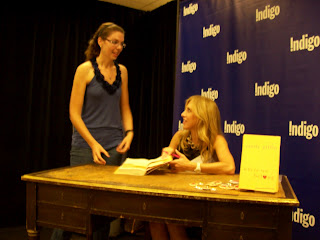 I'm pretty sure this picture was taken as I was telling Emily that I was there by myself as I got bailed on three times. She felt sorry for me and made sure I got a t-shirt. So, ladies who missed out (who shall remain nameless to protect the not-so-innocent... ;) kidding! love you all!) thank you for making me seem like a huge loser as I got a pretty adorable t-shirt out of it! Also, I babbled like an idiot when I got up to get my books signed. Anyone else experience complete stupideness when faced with someone famous and awesome? Ugh. Mildly embarrassing. Anyway...enough about my pathetic self!

Emily was amazing. Right off the bat she took photos of the crowd which we were to tag ourselves in on Facebook (if you're a fan of her page you can see the pics in her Toronto album). After telling us that she loves coming to Toronto, she spoke for about 20 minutes or so and we got to learn some fun tidbits. The one that stuck out the most for me was that Kirby (the teenager in her latest novel Where We Belong - you can read my review of this one here) has overtaken Darcy from Something Borrowed/Something Blue as her favourite character. She also shared that when her brother-in-law told her that he hated Marian (she's heard that a lot) her sister told him to be quiet. Emily said it was alright as the characters aren't actually real. She also told us that she relates most to Ethan (SOBO/SOBl) and Claudia (Baby Proof). She chatted with us for a bit longer before signing books for the insane number of fans who showed up at Indigo to see her.

Thanks to Twitter, I got to share a wave with Michele from Just a Lil' Lost (check out her recap post here!) and Andrea from Cozy Up with a Good Read as well as a quick chat with Anum from Paper Wings and Ink. Love our book blogging community :)

Even though I went by myself, I'm so glad that I decided to go. Emily's one of my favourite authors and I would have been kicking myself if I didn't go see her while she was in Canada. I'll probably even go see her again the next time she's here so I can get a couple more books signed!

Email ThisBlogThis!Share to TwitterShare to FacebookShare to Pinterest
Labels: author signing, Emily Giffin, Where We Belong