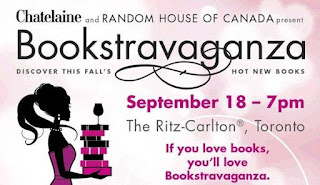 This past Tuesday I attended the first ever Bookstravaganza! This excellent bookish event was hosted by Random House of Canada and Chatelaine and was held at the Ritz Carlton in Toronto.

I haven't been able to attend many events like these because I've always been just a little bit too far from Toronto to justify it - about two hours away no matter where I've moved to (and I've lived in a few towns and cities). Since I've decided to start making more of an effort networking-wise with my blog, I decided this would be a really fun event to go to. And I was right!

I made plans to meet up with Lindsay (from Turning the Pages) at Union after we both got off our respective GO trains and we made the quick walk over to the Ritz. I had been worrying all day that it was going to pour but the rain held off and we stayed dry, yay!

Admittedly, Lindsay and I were like little kids when we got off the elevator. We were trying to take everything in and we got pretty excited by the sight of the swag bags. Hey, don't try to tell me you don't love free stuff ;) We checked in, got our raffle ticket (I swear the jar was rigged as each of the tickets called weren't even close to ours. Where were the 700-and something tickets?), and said hello to Lindsey from Random House. Being able to meet people, like Lindsey and Lindsay, that I've only interacted with online was definitely one of the highlights of the night.

We made our way further into the lobby and discovered that ladies from Bourjois were there armed with samples of lip gloss. Um, yes please! And this wasn't just any lip gloss. Oh, no. It was lip gloss that adjusts to the wearer's lip colour for a personalised pink!

Once we were made up, I made sure we made a pit stop at the bar. I could see that there was a special drink made just for this evening called Ms. Chatelaine - and it was delicious! There was also a candy bar which was equally delicious.

We weren't really sure what the event itself would hold so we waited expectantly for the presentation portion of the event to get under way! Various editors for Random House imprints as well as editors for Chatelaine made presentations about new fall books that they've enjoyed. I have to admit, my favourite revelation was learning that Gerry Dee's new book, Teaching: It's Harder Than It Looks, has a chalkboard on the inside covers. A CHALKBOARD!!! Bet you haven't heard of that before.

Random House also debuted six (well done) videos that showcased their new fall books - fiction, mystery, non-fiction, memoir, TV/movie, and lifestyle/food. You can watch all of them on their YouTube channel if you're interested. Authors Annabel Lyon and Shauna Singh Baldwin were present to talk about their new books, The Sweet Girl and The Selector of Souls respectively. I always love hearing authors talk about their work and this evening was no different. There were happy gasps and squeals when we were told that we would all get a copy of each book and would be able to get them signed at the end of the night!


Alas, the evening had to come to an end at some point. The swag bags were handed out, final goodbyes were said (including a quick hello and goodbye to Michele from Just a Lil' Lost and Brenna from Esther's Ever After), and Lindsay and I made our way back to Union. Another rushed goodbye as I had to run off to catch my train. As I made the trek back home I made the decision to try to and get back to Toronto more often for these kinds of events. We'll see if my wallet approves of that decision... :)