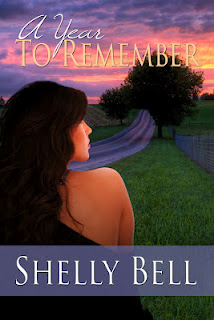 Welcome to a stop on the A Year to Remember tour hosted by CLP Blog Tours. I started out loving Shelly Bell's novel but then...well...we'll get to that.


When her younger brother marries on her twenty-ninth birthday, food addict Sara Friedman drunkenly vows to three hundred wedding guests to find and marry her soul mate within the year.
After her humiliating toast becomes a YouTube sensation, she permits a national morning show to chronicle her search. With the help of best friend, Missy, she plunges head first into the shallow end of the dating pool.
Her journey leads her to question the true meaning of soul mates, as she decides between fulfilling her vow to marry before her thirtieth birthday and following her heart’s desire. But before she can make the biggest decision of her life, Sara must begin to take her first steps toward recovery from her addiction to food.

Have you ever started reading a book, fell in love with it, and then ended up being just a little bit disenchanted by the end? This is what happened to me with this novel. When I started A Year to Remember, I was hooked. I found the concept interesting - trying to marry within the year - and even though the year deadline seems like something that's been written to death, it was fresh to me. What was the problem then? Well...a couple of bizarre errors that should have been caught in the editing stages didn't help matters. I could overlook Zac Efron's name being spelled incorrectly (she added an h) but to switch POV? That's a little crazy. I was reading along and enjoying the first person point of view when all of a sudden I got very confused because I was now reading from the third person POV, then, BAM, back to first person. Unfortunate.

The other thing that didn't thrill me was that Sara's story started getting...well...sort of preachy. I don't think that's quite the word I want but I can't think of how else to describe it. She realizes what she needs to do to fix her issues, and I love that, but suddenly it's all about the "higher power" and it was hard for me to stay interested. Don't get me wrong, I like stories that focus on more than just the romance and I like when characters go on personal journeys, but something just wasn't sitting well with me. I don't think the vast majority of people would feel the same as me so I urge you to check out the other reviews during this tour to get a better idea if you'd like this one. Deal? Deal.

Enough negatives. Like I said, I really liked the idea for this novel. Lots of great stories seem to start at a wedding. Add in a drunken toast and you've got a winner. I'm glad that Sara's YouTube video didn't harm her but instead helped her.

I had a feeling I knew who Sara would end up with and even though I was right, I really enjoyed the romantic twists and turns. It was a bit bothersome when she couldn't see that some of the guys were so incredibly wrong for her because she seemed perfectly content to settle. Happily, she found her way and had a happily ever after ending.

So, overall, even though I started out wanting to give A Year to Remember by Shelly Bell five stars, I ended up only awarding it three. I think I'd still recommend it because, like I said, other people may not have the same issues I did. It's worth a look because Sara's story is uplifting and I think a lot of people could identify with her. The end result of the romance storyline was really sweet as well.

Email ThisBlogThis!Share to TwitterShare to FacebookShare to Pinterest
Labels: A Year to Remember, blog tour, Chick Lit Plus, Shelly Bell