My Thoughts on Fifty Shades of Grey 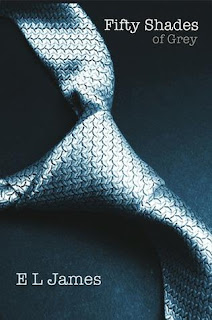 Yep. I finally gave in and read Fifty Shades of Grey by E. L. James. I was curious to see what all the hype was about. Would I fall into the "OMG Christian Grey is sooooo hot and I LOVE these books!!!" camp or the "How the hell did this crap get published" camp? As it turns out, I kind of fell somewhere in the middle.

In case you've been living under a rock, this is what this book is about:


When literature student Anastasia Steele is drafted to interview the successful young entrepreneur Christian Grey for her campus magazine, she finds him attractive, enigmatic and intimidating. Convinced their meeting went badly, she tries to put Grey out of her mind - until he happens to turn up at the out-of-town hardware store where she works part-time.
The unworldly, innocent Ana is shocked to realize she wants this man, and when he warns her to keep her distance it only makes her more desperate to get close to him. Unable to resist Ana’s quiet beauty, wit, and independent spirit, Grey admits he wants her - but on his own terms.  Shocked yet thrilled by Grey's singular erotic tastes, Ana hesitates. For all the trappings of success – his multinational businesses, his vast wealth, his loving adoptive family – Grey is a man tormented by demons and consumed by the need to control. When the couple embarks on a passionate, physical and daring affair, Ana learns more about her own dark desires, as well as the Christian Grey hidden away from public scrutiny.
Can their relationship transcend physical passion? Will Ana find it in herself to submit to the self-indulgent Master? And if she does, will she still love what she finds?

My boyfriend's mom always shares books with the ladies at work - it's like a giant book exchange. I've become their go-to girl for book recommendations and after hearing about their latest smutty book (can't remember what it was...a Bertice Small book, perhaps?) I figured I should mention the phenomenon that was E.L. James' Fifty Shades trilogy. Boy, were they happy about that suggestion. The books quickly made their rounds through the hospital where they work and caused much discussion. She made sure the first instalment was back in her hands for the May long weekend so I was able to read it. And read it I did.

I finished Fifty Shades of Grey in one day. It's not that I couldn't put it down, more that I had to have it finished before I left at the end of the weekend. It also wasn't a difficult book to read. I can see why many people have said that it's absolutely awful but I didn't find myself bothered by the writing quality. I didn't pay much attention to the quality of Twilight either - I read that for the story, not the writing.

Speaking of Twilight - I was constantly looking for comparisons between the vampire series and Ana and Christian's story. I knew that Fifty Shades started as a fan fiction and I can definitely see some similarities. Controlling bad boy? Check. Male best friend who's in love with the heroine? Check. (PS did she really have to call him Jose and make him Hispanic? Um, Jacob who's Native? Too similar for me) Takes place in Washington? Check. Naive, clumsy, "average" heroine? Check. Hero who had a tough upbringing, was adopted, and has adopted siblings? Check. Need I go on? Even though there are tons of similarities, many people could read Fifty Shades and not see any connections. Also, I thought it was...amusing? interesting?...that I wasn't in love with Christian. I don't really see his appeal, nor do I see Edward's appeal. I just find it interesting to note how the two series are so similar yet can stand alone quite easily to those who haven't read the other.

I can't complete this post without mentioning the erotic aspect of this book. Yes, there's a lot of sex. Is that all it is? No. There is a storyline there (even if some people will tell you that it's horribly written). It just so happens that Grey has a sexual fetish that factors heavily into his relationship with Ana. Nothing really shocked me - and I'm not sure what that says about me, perhaps I'm desensitized with all that stuff "kids these days" are seeing on TV? - but there were a couple of scenes that made me exclaim "WTF?!?" (If you've read it you probably know exactly what I'm talking about). It's not for everyone, that's for sure but it didn't really bother me at all.

Like I said, I fell somewhere in the middle of the "thought it was amazing" and "thought it was awful" scale. Did I enjoy reading it? Sure. I don't think I wasted my time. Did I think everyone and their mother should read it? No, not really. It's definitely a personal choice as many people would be mighty offended by the content. I can also tell that I wasn't that into it because I finished the first book almost a month ago and have little desire to read book #2 (Fifty Shades Darker, by the by). I'll eventually get around to finishing the series because I am curious to see how it wraps up. And yes, I'll probably watch the movie when it's released.

So, fellow readers, what did you think of Christian Grey? I'd love to hear your thoughts!