Just Finished: Between You and Me 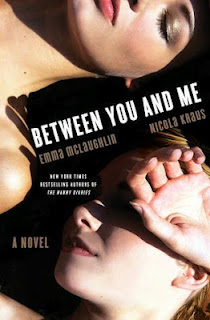 I was a little behind on The Nanny Diaries. I didn't watch the movie until about two years ago and didn't read the book until after that (this was backwards for me as I'm normally a read-the-book-then-watch-the-movie kind of girl). It's really unfortunate that it took me so long to get around to reading Emma McLaughlin and Nicola Kraus' first novel because that meant it was awhile before I discovered how much I enjoyed their work. Because I did like the two Nanny books I was very happy to have had the chance to read their latest, Between You and Me, before it was released (thanks NetGalley!). It was really enjoyable and had a great storyline.

Here's what the new book is all about:


In  Between You and Me, twenty-seven-year-old Logan Wade has built a life for herself in New York City, far from her unhappy childhood in Oklahoma. But when she gets the call that her famous cousin needs a new assistant, it’s an offer she can’t refuse. Logan hasn’t seen Kelsey since they were separated as kids; in the meantime, Kelsey Wade has become one of  Fortune Magazine’s most powerful celebrities and carrion for the paparazzi. But the joy at their reunion is overshadowed by the toxic dynamic between Kelsey and her controlling parents. As Kelsey grasps desperately at a “real” life, Logan risks everything to try and give her cousin the one thing she has never known—happiness. As Kelsey unravels in the most horribly public way Logan finds that she will ultimately have to choose between saving her cousin and saving herself.

There are all sorts of secrets in this book that are slowly revealed, one by one. You think you have an idea of what happened but it turns out you really don’t. I liked that there was a build up and that the secrets weren't all given away at once. I can't say I was totally surprised by any of the revelations but they were still unexpected. For example, I knew something awful had happened between Andy and Logan when she was young. Because I was waiting for the explanation I wasn't shocked but it was still a surprise to find out exactly what happened. I hope that makes sense! Long story short - I really liked how they revealed the many secrets in this novel.

I have to admit that I wanted a different sort of ending. Everyone seems to end up as they should and there’s a resolution but it’s done in a way that left me wanting more. The epilogue is a letter to Logan from another character (I don't want to give anything away so I'm not telling you who that character is). While it lets the reader know what happened to some of the other characters, I wish I had had Logan's final thoughts. I think I would have rather seen her end up in the destination she obviously ended up in (how's that for vague), reading the letter there, and that be the end. I do really like the letter though as it shows an acceptance of Logan and an explanation from this particular character.

Part of the fun of this book is a sort of behind the scenes look at a pop princess' breakdown. Remember Britney Spears' meltdown? This is reminiscent of her spiral down to Crazytown. It was so sad to see this pop idol crash and I had the same feeling while reading this book and learning about Kelsey's story (and yes, I loved Britney when I was young and will still sing along to her songs today). At the same time, it was really neat to see what "really" happens with these types of situations. Sometimes you forget that the people who are on those tabloids are actual people with real problems, just like us. I really enjoyed that aspect of the book.

Overall, I enjoyed Between You and Me. There are all sorts of things I can talk about - the family relationships, Logan's romantic relationships and what she had to learn from them - but I think I'll just tell you all to get a copy of this book (you can probably find a ton of giveaways right now as the book is being released tomorrow) and read it yourself. I think you'll enjoy it just as I did! And lucky for me, I have a copy of Dedication to read as soon as I can fit it in my reading schedule! :)

Email ThisBlogThis!Share to TwitterShare to FacebookShare to Pinterest
Labels: Between You and Me, celebrity, Emma McLaughlin, Nicola Kraus, The Nanny Diaries