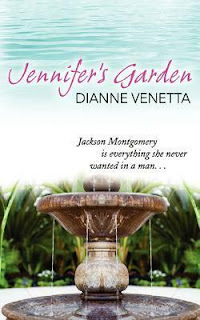 Welcome to my stop on the A Cozy Reader's Corner organized blog tour for Jennifer's Garden by Dianne Venetta. I'm so very glad Tiffany contacted me to be part of this tour because I really liked this book!

JENNIFER’S GARDEN epitomizes the showdown between a career woman’s criteria for the perfect husband and what true love means.
In a race against time, cardiologist Jennifer Hamilton is caught between her mother’s dying wish and taking the risk of a lifetime with Jackson Montgomery. He’s the man hired to complete the landscaping for her new home; the venue for her upcoming wedding. Jackson’s everything she never wanted in a man, but as the job progresses, his lure pulls strong. It’s an attraction she cannot deny.
And one that puts her career on the line.


It took me a little while to really like Jennifer - but I suspect that was supposed to happen. Like Jackson, I found her cold and closed off but I knew there was more to her than met the eye. She was facing a lot of stress due to her mother's illness and imminent death and I could tell that's where a lot of her standoffish behaviour came from. I was worried for a bit that I wasn't going to like her at all because she acted atrociously to Jackson. For someone who seems to have such high standards she doesn't seem to have any manners. She was incredibly prejudiced towards him and that drove me absolutely crazy. He's a landscape architect and she seemed too think he needed to show up in a suit and tie. Um. Right. Not sure where she got that idea. Anyway, she eventually saw sense, thank goodness!

The story in this novel was really sweet but also very sad. It was hard to read at parts when Jennifer was worrying abut what she was going to do without her mother. I admit I teared up a bit after her mother passed away which shows I was invested in Jennifer's story.

I wish the situation with Jennifer's old boyfriend was explained a little more. They dated when they were teens and he was the reason she never gave into passion and instead chose a man who ticked all the right boxes. Because of how the fallout with this boy was explained I first thought that her father was not a very decent man. It seemed like he completely flew off the handle - more so than a father normally would when he catches his daughter with a boy. As it turns out, her father was a good man and the story of how her parents almost weren't able to get married was quite sweet.

There were a few parts where the flow of the story was a bit awkward, such as a chapter ending in mid conversation. It wasn't a cliffhanger type discussion but the chapter was ended in an awkward  place. The only other thing I found odd was the Greek tycoon storyline. I don't think it really added anything to the story at all. (PS I know this is kind of vague but there's a bit of a twist, albeit a strange one, with this and I don't want to give anything away.)

Overall though I really liked reading about Jennifer's life and going through the troubling times with her. She is such a good person and it made me so happy to see everything work out for her in the end. I'm now looking forward to reading Lust on the Rocks which features Sam, Jennifer's best friend. Stay tuned for a guest post from Dianne Venetta as well!