Chick Lit Plus Blog Tour: Year of the Chick 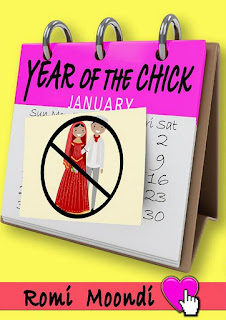 Thanks for stopping by on another stop on the CLP Blog Tour for Romi Moondi's novel Year of the Chick! Thanks to both Samantha and Romi for allowing me to take part in the tour :)

Let's cut to the chase - here's what this book is all about:

An awkward family homecoming at Christmas.
A humiliating public weigh-in, with two judging parents as the audience.
The announcement of a deadline for arranged marriage doom.
And that's just the first two chapters.
In "Year of the Chick," Romi Narindra must find love before her parents find her a husband. This is a difficult task in a world where self-consciousness is at an all-time high, and dating experience at an all-time low.
Severely lacking in seductive skills and uninspired by her corporate job, Romi turns to what she loves, by writing about her quest to find love on her brand new blog.
From whiskey-breath scum bags to uni-brow creeps and everything in between, Romi and her wingmen come up empty time after time. Just when giving up seems like the thing to do, she meets a fellow writer unexpectedly.
On the Internet.
So will it be arranged marriage doom, or an Internet affair that's not as creepy as "To Catch a Predator"?
Time will tell in the "year of the chick," a twelve-month quest to find love.
Tick-tock.


It took me a while before I really started to enjoy this book. I don't know if it had to do with the actual story or if I wasn't in the mood for this particular book. I'm thinking it had more to do with my frame of mind when I started it as I thoroughly enjoyed the second half of the novel. What seemed to turn it around for me was when the whole James situation (the Internet writer mentioned in the synopsis) blew up. (Sorry - that's a mild spoiler) At one point James told Romi that she plays the victim well by complaining all the time and I think that might be what turned me off Romi in the beginning. I could totally see her point (especially as I've been playing the "poor me" card lately myself. Sorry to my friends...) but it was sometimes hard to really connect with her and feel any real empathy. Once she had to face what had happened with James I felt more invested in Romi and her difficulties. Then the real fun began.

Romi is faced with some ridiculous situations. She's living with her sister and they have an unspoken rule that they don't discuss anything with each other nor do they reveal what the other is up to to their Indian parents. Who, by the way, just happen to want to marry off both their daughters to nice Indian boys as soon as possible. I don't want to give much else away but her parents seemed to have a knack of getting in the way of their daughters' lives and the results are both amusing and sad at the same time. I can't even imagine the craziness Romi would have been dealing with. That all being said - the insane parental situations provided some amusing moments. This book was funny! Though it would not be enjoyable to everyone, I found Romi's sense of humour to be refreshing and hilarious. For example, she's discussing chick flicks, You've Got Mail in particular, with a friend and says "Tom Hanks and Meg Ryan are more destructive than crack cocaine." I absolutely loved that and any other female who's watched those classic chick flicks will understand what she means. There are plenty of other gems like that line that kept me giggling throughout the book.

I always appreciate when the main character in a novel has some great friends. We get to meet quite a few of Romi's friends throughout the course of the story and they all help reveal certain aspects of Romi's personality. One friend is her wing woman and they go out all the time to hunt for available men. Another is her best friend and seems to know exactly what to do and what to say to help Romi through her messy life. We also get to see Romi at a party being thrown for an Indian friend who just got married to an Australian. Romi's parents would have heart attacks at the thought of their daughter marrying a non-Indian so she talks to her friend about the culture and how it's more appealing when it's not all you are surrounded by. Very interesting stuff. What I'm trying to get at is that Romi's friends are great supporting characters. Sometimes you want to know more about the friends but I didn't feel that with this book. Moodi did a great job of figuring out just how much information to give out about the friends without comprimising Romi and the story that she needs to tell.

This book is very much for the twenty-something girl so it was right up my alley and I enjoyed reading it. I'm also super excited that there's going to be a sequel. Woohoo! After the ending in Year of the Chick I am really looking forward to finding out what else is in store for Romi. Check back on Thursday when Romi stops by Books Etc. to talk about the aforementioned sequel and what her writing life will be like in 2012.