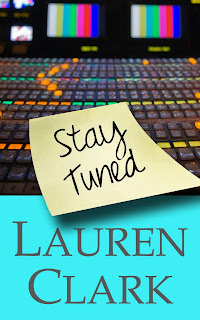 Thanks for stopping by another stop on the Chick Lit Plus Blog Tour for Lauren Clark's great novel Stay Tuned.

Here's the synopsis, from Goodreads:

For TV producer Melissa Moore, crisis management comes with the job. From employee disputes to her high-maintenance boss, there’s not much she hasn’t seen or can’t handle. But no one—including Melissa—expects a fistfight during the ten o’clock news. When sexy-but-crazy Alyssa Andrews lands a punch on her co-anchor’s face, Melissa jumps on set to help. She’s determined that WSGA’s reputation won’t be destroyed on her watch. Both anchors are fired and Melissa agrees to fill in—but not before polishing her look from haircut to heels. While the new Melissa wows WSGA viewers, her personal life starts fraying at the edges. Melissa’s husband is away more than he’s home, leaving cryptic Post-it notes in his wake. Her mother’s antics spiral out of control at the nursing home and a stalker decides Melissa is her next target. What happens next? Stay Tuned to find out…

The synopsis sort of makes the story sound a lot crazier than the book really is - which is actually a good thing. Everything has just the right level of craziness. It's all pretty believable, or at least the unbelievable aspects don't take centre stage so the rest of the story really comes through. The most outrageous thing about the book is Alyssa but her absolute nuttiness somehow works. The book manages to stay pretty realistic and it has a good storyline. It's less about the antics of the anchors at the studio and more about Melissa's own life journey. And that's what makes the book so great.

Melissa seems to have it all together - good job, good marriage, good kid, good friends. In particular she's very lucky because she has the best best friend a girl could ask for. Candace is always there for her and allows Melissa to rant, complain, or work things out however she needs to without minding that they always seem to be worrying about Melissa. Candace is a strong female and I think Melissa envies her a little bit. With Candace's guidance Melissa is finally able to realize that she's just as strong as her best friend. Some less than ideal things happen to Melissa along the way but those things help her realize what she's really made of. It was great to see Melissa go on this journey and end up with a great happily ever after.

For some reason I expected Melissa to be younger. Maybe I was thinking too much of the movie "Morning Glory", who knows. It didn't really matter once I realized that she was older and had a daughter in college. What I found mildly strange was that there wasn't a single conversation with Kelly, her daughter. This is because Melissa seems to be such an involved mom and really cares about her daughter. I'm fairly certain that she mentions talking to her on the phone but I never got to read the actual conversation. I know this might sound odd but I  think I was expecting Kelly to actually have a minor role. With everything that was going on with Melissa's life I really felt like we should have heard from her daughter. Obviously, this really isn't a deal breaker, I just found it a little odd.

Overall, I really enjoyed reading this book. It was funny, it was sweet, and it was a little heartbreaking. It had all the makings of a great chick lit novel and, boy, did it deliver. I'd definitely recommend this novel and I look forward to reading more from Lauren Clark.

By the way, are you feeling lucky? Head on over to the Stay Tuned Chick Lit Plus Blog Tour page and leave a comment. Two winners will receive a $10 gift card from Amazon!