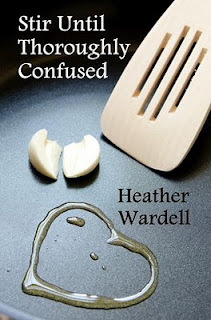 I cannot begin to tell you guys how much I love Heather Wardell's books. Stir Until Thoroughly Confused

was the third novel of Wardell's that I have read and it's been added to my Favourites of 2011 list along with the other two (you'll get the full list sometime in December, don't worry).

Here's what this one is about, courtesy of Goodreads:

Mary's given up everything, including an unsatisfying marriage, to become a chef. But the career comes with a side dish: Kegan, her sexy but controlling new boss.

They're soon in a relationship, and in all-too-frequent arguments, and when it becomes clear they can't work together and be together Mary faces a dilemma: keep her dream job or her dream man?

What I really loved about the first three novels I read were that they were all a little bit connected (Wardell calls them her "Toronto" series). Life, Love, and a Polar Bear Tattoo

was the first and Go Small or Go Home

was the next one - if you're so inclined and haven't yet done so, you can read my reviews of both of them here and here. I loved them both so I was cautiously optimistic that I would love Stir just as much and I did! I was a little worried as Kegan had shown up in the first two novels and, honestly, I wasn't his biggest fan. I don't know why I worried because Wardell was able to introduce a "life event" that changed Kegan and made him, well, more likeable. I was also unbelievably happy that Tess and Forrest from Go Small made frequent appearances - my favourite was the best and most touching wedding I've ever encountered. I'm glad Wardell brought back Ian and Candice too. Even though I didn't like them quite as much as Tess and Forrest, I still loved Polar Bear and their story and was happy to see some sort of closure with Kegan and Candice. Even though you can kind of figure out that the main characters (in this case, Mary and Kegan) will end up together it's always a journey and I love that. There are twists and turns that I don't expect and, to me, that's what makes a great novel. The twist in this novel comes from a fairly classic problem facing many women - should Mary choose her dream career or her dream man? I don't think you'll be disappointed with how Wardell handles this conflict and how she resolves it - I sure wasn't.

Wardell's characters tend be interested in things or come across things that I never would have thought about. For example, in Stir Kegan plays on an underwater hockey team. Like Mary I had never heard of underwater hockey and was so curious as to why Wardell had decided to put that in and how she had heard about it. Also, how did she come up with the menu premise for Magma? Focusing each dish around a certain spice, and having the tastings all have one spice in common. So interesting! It was the same sort of thing with Tess in Go Small - I never would have thought to create a character who liked creating miniatures. It's a part of the art world that most people wouldn't think of and I love that I got to be exposed to it through Wardell's book. There are lots of little things like the above examples that keep Wardell's books interesting and a little educational too.

Overall, I loved loved loved Stir Until Thoroughly Confused. Once again Heather Wardell has written a book that I couldn't get enough of. I can't wait to keep working my way through all of her other books. Lucky for me, there are quite a few of them and she just keeps writing more too! I highly recommend you check out her books because they'll leave you completely satisfied.