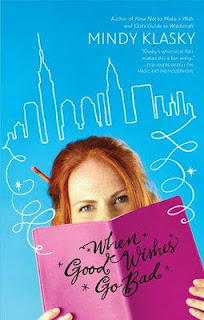 In honour of Halloween I wanted to read something a little magical for this month's Chick Lit Challenge read. I decided on the second book in a trilogy by Mindy Klasky, When Good Wishes Go Bad. I absolutely adored Klasky's trilogy about a librarian who turns out to be a witch (the first book in the Jane Madison series is Girl's Guide to Witchcraft and you should go read it now!) so I was excited when I found out she had started another triology, the As You Wish series.

Read on to find out what When Good Wishes Go Bad is all about, synopsis courtesy of Goodreads:


Rebecca Morris is suffering from an excess of magic!
Things that have disappeared: her boyfriend; her life savings; three-and-a-half million dollars from the theater company that pays both their salaries. (Coincidence? Um, no.) Also, the groundbreaking play she's been slaving over has vanished in a puff of copyright-colored smoke.
Other, weirder things that have appeared: a magic lamp complete with genie wishes. A fully furnished (and paid-for) Manhattan condo and fabulous designer wardrobe. (The last two courtesy of the first one, obvs.)
So Becca's putting that last wish on hold. What with discovering a mesmerizing new play, getting it onstage and falling hard for the adorably awkward guy who wrote it, Becca is swamped. And that's without factoring in the guerrilla gardener, popcorn magnate and the gender-bending genie with an agenda of his/her own.
Now Becca's hoping that her good wishes don't go oh, so wrong….

I actually liked the character in When Good Wishes Go Bad a little more than the first novel, How Not to Make a Wish. As bizarre as this may sound, it may be because of one of the wishes Kira makes in the first book. I'm not giving a whole lot away when I say that she essentially wishes for her crush to fall in love with her. It's not natural (because what's natural about a genie making someone like you?) and I think that could be why I didn't enjoy the book as much. In When Good Wishes Go Bad, on the other hand, Becca is attracted to someone and the romance grows naturally, without any magical assistance. Sounds kind of strange but sometimes you can't help what irks you, right? It's definitely not something that would keep me from recommending these books though!

There's a fun little twist to When Good Wishes Go Bad that I was not expecting. It was an interesting revelation and it provided insight into the magical universe. It made the book just that much better and I appreciated it. Ok, rereading those two sentences and that sounds incredibly vague. Sorry! I just don't want to give anything away :)

I'm looking forward to reading the third and final novel in the As You Wish series (I may even do a double feature for the Chick Lit Challenge this month!) even though it will mean the end of an amusing series that I've enjoyed reading. I'd recommend this book to anyone who's looking for a little something extra in their chick lit novels - in this case the something extra is a magical gender-shifting genie. These are fun, sweet books and I think any chick lit lover will enjoy them.