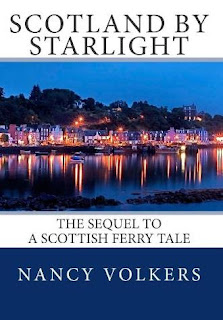 Oh my gosh. That's all I can say to this novel right now. Wow.

I really liked Nancy Volkers' first novel, A Scottish Ferry Tale, so I knew I should like the sequel Scotland by Starlight as well. I was actually wrong. I loved the sequel. I started the book a few days ago, finished it this evening and during that time I have pretty much been thinking about it nonstop. It was that good. But...well, there's one thing I can't get over but I'll give you the synopsis from Goodreads first and then I'll really get into what I thought about this book.


Cassie Wrentham is on her way to Scotland again... but this time it's not vacation. She's moving in with Ralph Macnair, the charismatic Scotsman who stole her heart. But Cassie wouldn't be Cassie without doubts. Will she find a job in a tight U.K. economy? Would marrying Ralph now be only for convenience's sake? Will she fit in, make friends, make a life there? Or will it all fall apart? Bursting with a lively cast of characters, all with their own stories and challenges, Scotland By Starlight follows Cassie and Ralph from the new beginnings of their intense relationship to a conclusion like no other.

I read A Scottish Ferry Tale as part of a blog tour organized by Chick Lit Plus (if you missed my review, you can find it here). I really enjoyed it, and not only because it was set in Scotland (more about that later). Nancy oh so generously sent me a (signed!) copy of Scotland by Starlight a few months ago and I finally got to read it this week. This was one of those books that I did not want to put down and when I had to, I couldn't stop thinking about it. I don't know what it was about the story that grabbed me so much but I could really feel the intensity of Cassie and Ralph's relationship. Did anyone else feel that way? They love each other so passionately and it really seemed to come through the pages. Their relationship managed to be both idealistic and realistic at the same time. They were just like any other couple with their disagreements, insecurities, and doubts but they were so madly in love with each other and it showed. They seemed to have the perfect balance of a serious but fun relationship and I think that's something that everyone strives for.

One of the things I didn't like about A Scottish Ferry Tale was that Ralph was so much older than Cassie (twenty years older, to be precise...at least, I hope that's precise. My math skills aren't exactly stellar). It was an issue that I felt wasn't mentioned or even really acknowledged in the book. In Scotland by Starlight, however, it really seemed to be addressed, especially when Cassie talked about how she was worried about being left alone. This made it easier for me to really imagine Cassie and Ralph correctly (I used to see Ralph much younger...as you'll see in my review I pictured him looking Matthew Goode) and I think I appreciated the story even better. Personally, I still can't quite get over the twenty year gap, but their love for each other definitely overshadows their age difference.

Part of why I loved this book, and why I chose it as part of the Vacation Reads Challenge (see Ruby's Reads blog for details), is that it is based in Scotland. Being part Scottish (my last name is Stewart. Can't get a whole lot more Scottish than that!) I've always wanted to travel to Scotland. This was one of those books that made me feel like I was actually there. Not because they traveled to many Scottish tourist destinations (though Cassie does show her friend Leslie around a bit when she's visiting), it's more that the characters were all so incredibly Scottish. They live, breath, and speak Scottish on every page and I found myself totally immersed in it. It didn't hurt that Gaelic is spoken by Ralph and his friends and family in their everyday speech. Can you imagine your boyfriend/fiance/husband calling you "mo chridh", instead of the "my heart" or saying "Is tu m'annsachd" instead of "you are my best beloved". Swoon.

I also really liked that each chapter began with the motto of a different Scottish clan. It really added an additional Scottish element to the novel. Each motto was chosen for a reason as it related to the chapter that followed. Of course, I'm partial to chapter 17:


Virescit vulnere virtus
Courage grows strong at a wound
Clan Stewart
There are probably many other things I could say about this book but I don't want to give anything away. That and it's getting late and my brain has stopped functioning correctly. I have to say that I was blindsided by the ending, hence the needing to breathe at the beginning of this post. If you're like me (and a couple of other people) you will cry. A lot. ﻿I would probably give this book a five star rating if it wasn't for the ending. I know not all books can have a happy ending but having a sad ending come out of nowhere can be tough. However, that being said, the whole book is so intense, romantic, and real and the conclusion really reflects that. All in all, I loved Scotland by Starlight. I highly recommend you check out both of Nancy Volkers' books - and then let me know what you think!
Now that I've shared with you my ideal travel destination - who wants to tell me where they would love to travel?
Happy reading :)


UPDATE: When I finished this post I emailed Nancy to let her know that I had read, reviewed, and loved her book. I appreciated that she took the time to reply and thank me. I wanted to share a part of her email with you because it shows how authors don't always know how their stories will end up either:


Many folks are upset by the ending.... all I can say is that I sat down one day and started writing in Ralph's voice, and that's what came out. I didn't like it much either! :-)