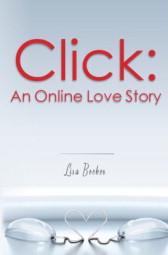 Welcome to my second review for the challenge hosted by Chick Lit Plus! I decided to tackle two debut novels this month. The first was Confessions of a Call Center Gal (read my review here) and the second is the focus of this review - Click: An Online Love Story by Lisa Becker.

I wanted to read this novel because Chick Lit Plus hosted a blog tour back in July and I thought it looked like fun. (If you're interested in what others had to say about this novel, read on here) Here's the synopsis from Goodreads:

Fast approaching her 30th birthday and finding herself not married, not dating, and without even a prospect or a house full of cats, Renee Greene, the heroine of Click: An Online Love Story, reluctantly joins her best guy pal on a journey to find love online in Los Angeles. The story unfolds through a series of emails between Renee and her best friends (anal-compulsive Mark, the overly-judgmental Ashley and the over-sexed Shelley) as well as the gentlemen suitors she meets online. From the guy who starts every story with "My buddies and I were out drinking one night," to the egotistical "B" celebrity looking for someone to stroke his ego, Renee endures her share of hilarious and heinous cyber dates. Fraught with BCC's, FWD's and inadvertent Reply to All's, readers will root for Renee to "click" with the right man.

Overall, I thought this book was fun and the story was entertaining. What was interesting about this novel was that it was written entirely in emails. I liked the idea but it didn't quite work for me. I didn't feel like I really got a great feeling for Renee, the main character, let alone any of the secondary characters. Lisa did a good job of putting explanations for what happened in the emails between Renee, Shelley, Ashley, Mark, and the various men Renee meets online. That being said, it seemed like this format worked really well for events and plot but the emotional part of the story, the part that really makes you connect with the characters, didn't quite work through emails.

The only other thing I didn't like about this book was how totally "over-sexed" Shelley is. Most people are aware of Samantha in Sex and the City and how promiscuous she is. Shelley was just the same way. I have no issue with her sleeping around and finding a new man every weekend, but what bothered me was that every single conquest was given a nickname - The Cuddler, the Tongue, Mocha Man, etc. It was funny to start but once I got really into the novel I just kind of got tired of it. Part of that may be because I felt it took away from the main point of the novel which was Renee trying to find a man through online dating.

All that being said...I really liked the whole premise of the novel. The novel begins right after New Year's and an email from Mark where he tells Renee that he wants to try online dating but wants some moral support. Renee is going to be turning thirty this year so she thinks, why not? I liked that she met all kinds of guys on the site and seemed to get emails from every single type of guy. I could really feel her frustration at some points and could understand when she wanted to just throw in the towel. The dates were amusing to read about. This is one time that the email format of the book worked. I felt like I was another one of Renee's friends and she was filling me in on another of her dates from hell.

Overall, I did enjoy this book. It was a really fast and fun read. I would recommend it to any chick lit fans but would make sure they knew it was not a conventional novel. The email format may not be for everyone. I think you'll laugh out loud at quite a few parts and cringe right along with Renee.
Posted by Books Etc. at 9:51 PM