Thank you to Amanda Strong for this awesome guest post! It's really insightful and I hope you all enjoy it! 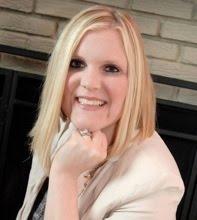 Have you been “friended” by an ex? Have you spied on your spouse or significant other’s Facebook page? Have you crossed the line with one of your “friends”?  In my case, all of the above, and that is why I wrote With Just One Click. To clarify, none of these stories are about me, but they have happened to friends, or friends of friends, and more frequently than you’d think!

Facebook was the catalyst for me to dust off my pen and paper and pursue my passion … writing. Over the past few years, I heard stories about the complicated friendships and relationships formed on Facebook.  The sordid details were more like a Hollywood script than typical suburbia life. The people would change, but the same universal subjects popped up like, reconnecting with an ex, spying on your significant other or not trusting your partner’s friends, and crossing the line with a friend, leading to infidelity. The main stars of these plots were everyday people, someone’s sister, wife, mother, friend, or neighbor. These scenarios appear relatable and could potentially happen to any one of us given the right situation or circumstance.

I learned social networking really doesn’t have many rules to live by, thus creating an enormous amount of freedom for each friend. When I began this book, I felt in some ways Facebook ruined lives. Now, I’m not a Facebook hater at all, but when you see first hand one of your closest friend’s marriage destroyed over a reconnection on Facebook, you can become bitter about social networking. Or when you hear one of your friends can’t be friends with her own husband, because she’s too suspicious and can’t help from stalking her own husband’s Facebook page. Or when a friend is friended out of the blue by an ex, and you see the curiosity and memories eat away at them, and the “what ifs” flooding their head. When you watch all these examples hover around the people you care about creating hurt and indecision, some negativity is bound to occur.

As a friend, I witnessed the demise of a marriage in front of my eyes as an unwilling spectator, watching innuendo and speculation on Facebook turn into heartache. After that moment, I realized how comfortable people were on social networking sites. Almost forgetting so many people can see every word or picture you post. I wanted to highlight these relatable situations but in a fictionalized setting, hoping readers themselves would come to their own conclusions about social networking and relationships.

In the book, I follow three women’s journeys, navigating through social networking and pivotal times in their lives. Chloe, a successful movie reviewer and serial dater, is added as a friend by her first love ... the one who left her standing at seventeen with a note in her hand as he simply walked away.  She’s faced with a decision… confirm or ignore a person she once hated, resented, and loved. Morgan, a loyal stay-at-home mother and wife, is blindsided one day with a discovery ... one of her husband's friends is his single and very flirtatious ex-girlfriend.   Brynn, a lonely mom to two distant teenagers and workaholic husband, becomes immersed in Facebook ... the one place she finds solace, hope, and herself again.  When she revisits the past with one of her friends, her world is turned upside down with regret and indecision.  Three lives changed forever with just one click. Confirming a friend isn't as easy as it seems ... but do these women have more in common than just Facebook? Beyond the juicy relationships, I touch upon the positives of social networking, like the friendships and the community setting where people can interact with friends they may otherwise never have been in contact with. I personally felt it was important to be neutral and not sway towards saying Facebook is good or bad. People will have their opinions on this subject, and they will not always agree. I hope the reader will come to their own conclusions about the three women’s choices.

What surprised me after finishing the book and creating these stories was that I felt differently than I did in the beginning.  Mainly, Facebook is a forum used by individuals, each creating their own experience, always different and unique for that person. Social networking is a tool, whether you choose to join or not, and I think a person has to be honest with themselves about what they want out of the experience.  Ultimately, each person is in charge on Facebook. With or without temptation, they themselves are the ones making the decisions on their behalf, not the social networking site they happen to be signed up on.
Posted by Books Etc. at 8:43 PM