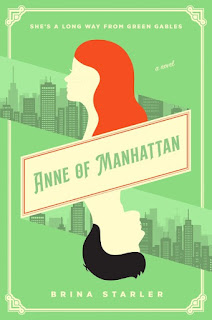 I have loved Anne of Green Gables for a long, long time. It's one of the first big girl books I remember reading and it was so long ago that I can't really remember when I first picked it up. But I remember the feeling of reading the series and how much I loved the wonderful, descriptive world L.M. Montgomery created and the dreamy red-headed orphan who inhabited it. I've reread them all and have watched most adaptations. I've seen a stage production. I've visited Montgomery landmarks - though Green Gables still eludes me. Maybe in 2022? Even though I'm a really big Anne fan, I welcome additions to the Green Gables world so it was with cautious optimism that I requested to review Brina Starler's Anne of Manhattan, just published earlier this month. And, friends? I adored it.

After an idyllic girlhood in Avonlea, Long Island, Anne has packed up her trunk, said goodbye to her foster parents, Marilla and Matthew, and moved to the isle of Manhattan for grad school. Together with her best friend, Diana Barry, she’s ready to take on the world and find her voice as a writer.When her long-time archrival Gilbert Blythe shows up at Redmond College for their final year, Anne gets the shock of her life. Gil has been in California for the last five years—since he kissed her during a beach bonfire, and she ghosted him. Now the handsome brunette is flashing his dimples at her like he hasn’t a care in the world and she isn’t buying it.
Paired with the same professor for their thesis, the two former competitors come to a grudging peace that turns into something so much deeper…and sexier than either intended. But when Gil seemingly betrays her to get ahead, Anne realizes she was right all along—she should never have trusted Gilbert Blythe.
While Gil must prove to Anne that they’re meant to be together, she must come to terms with her old fears if she wants a happily-ever-after with the boy she’s always (secretly) loved.

One thing you must know is that Anne of the Island is my favourite of the series and I've been hoping for years that someone would do a true adaptation of that book. Anne with an E didn't get that far into the series and the mini-series from the '80s didn't quite interpret the third book in the series  as I would have liked. So. I was really, really excited when I realized that Starler's novel was essentially going to be a modern Anne of the Island. It's just the island in question is in New York, not Canada. And, you know, it's present day, not the late 1800s. I liked that Starler aged Anne for the story, too. She's in her mid-twenties in the book and is working on her Master's so she's not a new college student. She's still young but she's grown up, too. All of that made for a story that just hit a lot of my favourite things so it's no real surprise that I enjoyed the book.

For the most part, Starler did a good job at honouring the feeling of the characters Montgomery created. Though I did find Anne to be a bit more...organized and precise than she should have been. I didn't really expect to see the dreaminess of a young girl but she seemed to be more controlled and, dare I say boring, than I thought that girl would have grown up like. But the friendships with Diana and Phil and Jane were just as you'd expect (even if the story is more about Anne and Gil than Anne and her bosom friends). The women are ride or die and even if they weren't in the story as much as I wanted, you knew they were in Anne's corner. Marilla and Matthew were as delightful as ever and Rachel's busybody-ness was softened. Starler updated the characters' skin colours and sexual preferences, as you may expect from a book set in present day NYC. And Gilbert? Still my OG Book Boyfriend. I was swooning constantly.

Speaking of...it was a bit weird to be reading as Anne and Gilbert had sex because, well, this is ANNE. But it's also a modern day love story and a girl has needs. The romance was swoonworthy and you'll probably need a fan during the steamier scenes. And even though I knew how things turn out for Anne and Gilbert in the original story, I was still super invested in discovering how their Happily Ever After would turn out in this adaptation.

The novel has both present day and flashback scenes and both Anne and Gilbert have chapters from their perspectives. The "then" chapters tell the modern day version of Anne of Green Gables and outlines how Anne came to arrive at Green Gables and the interactions between her and Gil when they were younger. I liked having past and present come together and appreciated seeing the story from each character's point of view.

I enjoyed Anne of Manhattan so much. Adaptations of beloved classics aren't for everyone and they aren't always well done but I was happy with Brina Starler's novel. It was a familiar story that made my heart so happy but it was modernized just enough to be a fresh story for today's readers. I'd recommend it to those who enjoy adaptations. If you're more of a purist, maybe pass on it.

*An egalley was provided by the publisher, HarperCollins Canada, via Edelweiss in exchange for review consideration. All opinions are honest and my own.*
Posted by Books Etc. at 8:07 AM