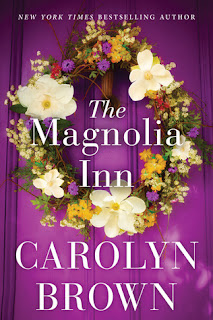 I'm very much a mood reader. This, as you may imagine, makes being a blogger pretty difficult. Sometimes I have no choice but to read a certain type of book at a certain time even if I'm not totally in the mood for it. (And let's not even get into having to read a new library book because the hold has come in and I have just seven days to finish it.) Now, I'm very aware of this quirk of mine and I've been blogging a long time so I know when my mood affects my feelings on a book. Why am I mentioning all this? Because I picked up The Magnolia Inn to read because I needed the kind of story it promised. Carolyn Brown's novel delivered on the feelings I needed but it didn't quite wow me with the execution.


New York Times bestselling author Carolyn Brown brings together two wounded hearts in a Texas romance of second chances and twice-in-a-lifetime true love.
Inheriting the Magnolia Inn, a Victorian home nestled in the East Texas pines, is a fantasy come true for Jolene Broussard. After living with the guilt of failing to rescue her self-destructive mother, Jolene knows her aunt and uncle’s B&B is the perfect jump start for a new life and a comforting place to call home. There’s just one hitch: stubborn and moody carpenter Tucker Malone. He’s got a half interest in the Magnolia Inn, and he’s planting his dusty cowboy boots squarely in the middle of her dream.
Ever since his wife’s death, Tucker’s own guilt and demons have left him as guarded as Jolene. The last thing he expects is for his new partner to stir something inside him he thought was gone forever. And as wary as Jolene is, she may have found a kindred spirit—someone she can help, and someone she can hold on to.
Restoring the Magnolia Inn is the first step toward restoring their hearts. Will they be able to let go of the past and trust each other to do it together?

I'm a big fan of romantic movies. I don't watch nearly enough of them these days because I just don't spend nearly as much time watching movies alone as I once did (I've also been binging the hell out of Outlander - the books and the TV show). I didn't love the way this novel was written but I could totally see this as a Hallmark-esque movie. I would love to watch it on the screen - likely much more than I did reading it. The setting is perfection and I'd love to see the Inn transform as Tucker and Jolene worked on it. There's just something about the way the story was told that would feel better as a script than a novel.

I think one of my issues with this book was I couldn't quite feel a connection with Jolene and Tucker. It was like the reader was behind the walls each of them had built up around themselves and by the time they had torn them down and admitted their feelings to one another (it's a romance, this is not a spoiler. You know it's coming.), the book was over. Maybe part of this had to do with my own personal feelings and history. I don't know what Jolene and Tucker are feeling because I've never had to go through anything like they have. I'm not saying I need to have had the same experiences as the characters I'm reading have had but, if that's the case, I need the author to give me more. I don't know what it was that I was missing but there was something, at least for me.

One of the things I did really like about this book (and there were things I liked, I promise) was that it wasn't strictly a romance. This novel shows that family doesn't have to be blood and it can look any way you want it to, as long as you're with people who love you fiercely and without question. It's about those friendships that endure not just years but decades. It's about finally finding your place in the world, your roots, and somewhere to call home. That message is why I would say this book should be read.

While The Magnolia Inn didn't completely thrill me, I did quite enjoy my time reading Carolyn Brown's latest book. It was so very Southern - sweet and sassy - and had a really great feel to it. And that cover is just to die for, isn't it? I would definitely love to stay in this Inn!

*A copy of this novel was provided by the Canadian distributor, Thomas Allen & Son, in exchange for review consideration. All opinions are honest and my own.*
Posted by Books Etc. at 7:46 AM No comments: Links to this post 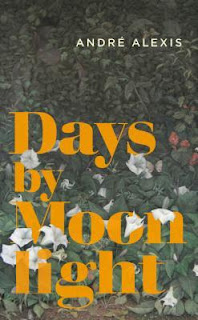 I first heard of André Alexis when Fifteen Dogs was published. I read it for Niagara Life and found it really weird but really good. I don't do "literary" books. You know the ones...the ones that are meandering and don't seem to have a point and usually have characters who are way out there and/or super messed up. I don't care if I "should" like them. I just don't. Usually. Alexis is an author who is lauded by critics and writes literary novels I, surprise, actually enjoy. I'm not saying I totally "get" them but I enjoy the ride. Days by Moonlight is Alexis' latest novel and it was a confusing but interesting and entertaining read.


Botanist Alfred Homer, ever hopeful and constantly surprised, is invited on a road trip by his parents' friend, Professor Morgan Bruno, who wants company as he tries to unearth the story of the mysterious poet John Skennen. But this is no ordinary road trip. Alfred and the Professor encounter towns where Black residents speak only in sign language and towns that hold Indigenous Parades; it is a land of house burnings, werewolves, and witches.
Complete with Alfred's drawings of plants both real and implausible, Days by Moonlight is a Dantesque journey taken during the "hour of the wolf," that time of day when the sun is setting and the traveller can't tell the difference between dog and wolf. And it asks that perpetual question: how do we know the things we know are real, and what is real anyway?

Days by Moonlight is part of a series, a quincux, that Alexis is writing. (Check out this Globe and Mail article that explains more about the series and his Giller Prize win.) The Hidden Keys was also part of the quincux (and I also reviewed it for Niagara Life) and also really weird and really good. I haven't read Pastoral yet, which is the first book in the series, but it was mentioned as a novel in Days by Moonlight which was really neat.

As you can tell from the synopsis, there was a lot happening on Alfred and Morgan's road trip through southern-ish Ontario (I've noticed my idea of what's southern Ontario has changed quite a bit since I moved to Niagara). The pair start their trip in Toronto and meander from Whitchurch Stouffville to Nobleton to Feversham. Along the way they experience increasingly stranger events. The burning of the houses made me sad and confused and another town, as described in the synopsis, where Black residents speak in sign language had me outraged. The Indigenous Parades also infuriated me. The werewolves were intriguing. And all, in their own way, commented on our world today.

It might not seem like it, but the book was amusing, in its own dark way. The circumstances Alfred and Morgan find themselves in are so bizarre that the reader cannot help but laugh, at least a little.

Alfred was a really interesting character and one I thoroughly enjoyed reading. He was heartbroken after the accidental death of his parents and the breakup with his long-time girlfriend. I think before the road trip he was slowly starting to realize he needed to find a way to live with his grief and move past the heavy fog he was under. He was definitely distracted on the road trip which may have been the professor's ultimate goal.

Days by Moonlight isn't going to be for everyone. But I encourage you to read André Alexis' work and explore the interesting and whimsical worlds he has created.

*A copy of this novel was provided by Publishers Group Canada and Coach House Books in exchange for review consideration. All opinions are honest and my own.*
Posted by Books Etc. at 7:30 AM No comments: Links to this post