Review: At the Mountain's Edge 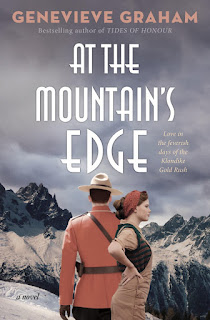 At the Mountain's Edge was one of my most anticipated reads of the year. I've loved all of Genevieve Graham's other historical fiction titles (you can see two other reviews here and here) and always look forward to her new releases. This latest one - just published today - moves to Canada's West coast and focuses on the Klondike Gold Rush. The drama practically writes itself! Sometimes having high expectation of a novel can be a bad thing but Graham's new book was great and I loved reading it.


From bestselling author Genevieve Graham comes a sweeping new historical novel of love, tragedy, and redemption set during the height of the Klondike Gold Rush.
In 1897, the discovery of gold in the desolate reaches of the Yukon has the world abuzz with excitement, and thousands of prospectors swarm to the north seeking riches the likes of which have never been seen before.
For Liza Peterson and her family, the gold rush is a chance for them to make a fortune by moving their general store business from Vancouver to Dawson City, the only established town in the Yukon. For Constable Ben Turner, a recent recruit of the North-West Mounted Police, upholding the law in a place overrun with guns, liquor, prostitutes, and thieves is an opportunity to escape a dark past and become the man of integrity he has always wanted to be. But the long, difficult journey over icy mountain passes and whitewater rapids is much more treacherous than Liza or Ben imagined, and neither is completely prepared for the forbidding north.
As Liza’s family nears the mountain’s peak, a catastrophe strikes with fatal consequences, and not even the NWMP can help. Alone and desperate, Liza finally reaches Dawson City, only to find herself in a different kind of peril. Meanwhile, Ben, wracked with guilt over the accident on the trail, sees the chance to make things right. But just as love begins to grow, new dangers arise, threatening to separate the couple forever.
Inspired by history as rich as the Klondike’s gold, At the Mountain’s Edge is an epic tale of romance and adventure about two people who must let go of the past not only to be together, but also to survive.

I'll tell you one thing. I'm fairly confident there is no way I would have survived Liza's trek. I work out and am healthy but I do not do well when conditions are less than ideal. I am one to get hangry. I'm not even a huge fan of camping. So, the thought of having to haul all of my important worldly possessions up a freaking mountain during a Canadian winter and not having easy access to food? Oh, there's no way. Therefore, I have huge respect for Liza - and all the other women who made this trip because their husbands and fathers made the decision for them. I can't say I understand why men would battle the elements - and each other - to pan for gold but I suppose I'm not much of an adventurous sort. What I really liked is that Graham had Liza's father want to head north not because of the gold, exactly. He wasn't going to mine. No, he saw a business opportunity. It was a sound plan but I didn't blame Liza and her mother one bit for not being thrilled with having to uproot their life in Vancouver.

Reading historical fiction is always interesting and for several reasons. One is that you're reading it through a modern lens. I'm sure most women these days would balk at their husbands dictating their lives. You might do crazy things for love - like hike up a mountain in stupid cold weather with no promise of making it to your destination alive or with all your extremities - but I'm sure as hell not being told what to do. So, I admit it was hard to get into the correct mindset with this book. That also proved difficult when Liza's father had a conniption when she found a pair of trousers. A woman in pants! Scandalous! I mean, I know it would have been but it seems so laughable now. These are all important points that I'm glad Graham included as it really allows the reader to learn about the time and how, maybe, we still have further to go.

I must say that I did find the beginning of the story to drag ever so slightly. I must have expected Liza and Ben to meet (and fall in love) early on but each character had to go through so much - physically and emotionally - before they were able to be together. Although reading how they had to make the arduous trek to Dawson City was interesting at times, it got a bit repetitive and I was definitely ready for Liza to set up shop by the time she arrived in town.

Liza might be one of my all-time favourite characters. She's feisty, smart, strong, and determined and those were all qualities she needed when she was traveling and dealing with absolutely horrific conditions. She's very much her own woman and I'm glad Ben recognized that.

Graham has a knack for taking historical events in Canada that we (should) all know about and adding a human element that makes it even more interesting and engaging. Sure, I must have learned about the Klondike Gold Rush back in school but thanks to Graham (and my sister working in the Yukon last summer), I know a lot more about Dawson City and what it would have been like during that crazy time. Also, a fun aside: my sister had visited Diamond Tooth Gerties when she was up north and told me it was Canada's first casino. And doesn't Gertie, diamond tooth and all, pop up in this book? You can still visit the casino and can take in a can-can show, as my sister did.

While At the Mountain's Edge may not be my favourite novel by Genevieve Graham, I was really happy with it. She once again managed to take an important event in Canadian history and bring it to the forefront of readers' minds. I highly recommend you read all of Graham's novels - and then tell me what you think!

*An ARC of this novel was provided by the publisher, Simon & Schuster Canada, in exchange for review consideration. All opinions are honest and my own.*
Posted by Books Etc. at 7:45 AM