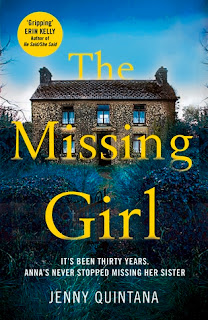 It's hard to believe The Missing Girl is Jenny Quintana's debut novel. She has written a twisty story that is both heart-wrenching and heart-pounding all at once. I had no idea what would happen at the end of this novel which made it an exciting read.


It's been thirty years since Anna's older sister disappeared. Anna's never stopped missing her.
When Anna Flores' adored older sister goes missing as a teenager, Anna copes by disappearing too, just as soon as she can: running as far away from her family as possible, and eventually building a life for herself abroad.
Thirty years later, the death of her mother finally forces Anna to return home. Tasked with sorting through her mother's possessions, she begins to confront not just her mother's death, but also the huge hole Gabriella's disappearance left in her life - and finds herself asking a question she's not allowed herself to ask for years: what really happened to her sister?
With that question comes the revelation that her biggest fear isn't discovering the worst, it's never knowing the answer. But is it too late for Anna to uncover the truth about Gabriella's disappearance?

I don't read a ton of thrillers or mysteries but I usually enjoy them when I do pick one up. I don't really like the scary/terror/terribleness that comes with some of the stories though and that's why I only read them once and awhile. What I do love about them is how I'm never sure what's going to happen next. When they're done well, they surprise me and keep me on my toes (without scaring me of course because I'm a big wimp). Quintana's found that perfect balance I need and I found myself often thinking of the story and the characters when I wasn't reading. I was so invested in Anna's story and, being a fan of happy stories, hoped for a happy ending...or, at the very least, a satisfying closure for her.

I think the way Quintana put together the novel made a big difference in how the reader feels about the story. Each chapter alternated between 1982 and "present" day and they both move forward in time at the same pace (or at least at a similar one). By doing this, we get to meet all the characters who are important to the story, even the ones who are now dead or still missing. And you have to wonder, what do the people who are still around really know about what happened to Gabriella?

This story is about so much more than a missing girl. There are secrets among everyone (seriously...the shocks just keep on coming) and the knowledge that no family is perfect. You may not be able to understand why Anna left behind her remaining family and her life when you first meet her but once you know what it was like for her after Gabriella went missing, you can't really blame her.

If you're in the mood for a family thriller (is that a proper way to describe this? I have no idea), The Missing Girl will keep you interested. Jenny Quintana has written a story that will keep you guessing - and hoping - until the very end.

*A copy of this novel was provided by the Canadian distributor, Publishers Group Canada, in exchange for review consideration. All opinions are honest and my own.*
Posted by Books Etc. at 8:02 AM No comments: Links to this post

Review: I Owe You One 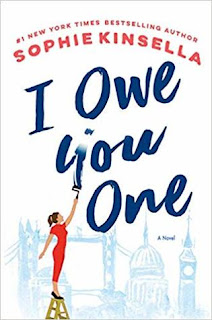 It seems like I've been reading Sophie Kinsella forever. Lately her novels are hit and miss with me but even if I don't love them, I'm usually thoroughly entertained and left feeling satisfied by the fun and lovely story she's written. I Owe You One, out today, was one that didn't quite hit the mark for me but I had a good time reading it.


From #1 New York Times bestselling author Sophie Kinsella, an irresistible story of love and empowerment about a young woman with a complicated family, a handsome man who might be “the one,” and an IOU that changes everything
Fixie Farr has always lived by her father’s motto: “Family first.” But since her dad passed away, leaving his charming housewares store in the hands of his wife and children, Fixie spends all her time picking up the slack from her siblings instead of striking out on her own. The way Fixie sees it, if she doesn’t take care of her father’s legacy, who will? It’s simply not in her nature to say no to people.
So when a handsome stranger in a coffee shop asks her to watch his laptop for a moment, Fixie not only agrees—she ends up saving it from certain disaster. Turns out the computer’s owner is an investment manager. To thank Fixie for her quick thinking, Sebastian scribbles an IOU on a coffee sleeve and attaches his business card. But Fixie laughs it off—she’d never actually claim an IOU from a stranger. Would she?
Then Fixie’s childhood crush, Ryan, comes back into her life and his lack of a profession pushes all of Fixie’s buttons. She wants nothing for herself—but she’d love Seb to give Ryan a job. And Seb agrees, until the tables are turned once more and a new series of IOUs between Seb and Fixie—from small favors to life-changing moments—ensues. Soon Fixie, Ms. Fixit for everyone else, is torn between her family and the life she really wants. Does she have the courage to take a stand? Will she finally grab the life, and love, she really wants?

The main issue I had was with Fixie and how she was a doormat and incredibly naive. I felt a little bit like her but I wanted to swoop in and fix things for her because she was so blind to what was going on. My heart also hurt for her because her family just didn't listen to her. Ever. I also had issues with the family aspect and it did not get much better by the end of the book. There were some changes but the feeling at the end just left me even more frustrated at the attitudes of her family, her mum included. (I have to be vague here because it's the end of the book but if you've read it or don't care about spoilers, message me and we can talk about it!)

All those feelings aside, I am really glad I read this book. I had read a really bad one just before it and knew Kinsella would lift me up. I told a few friends that this book was like a balm for my soul. I could feel myself relaxing as soon as I started reading it. That is what makes a good book for me - the way you feel. And also why I will never, ever judge someone for what they read. Because that book I didn't like? Total CanLit and the most literary mumbo jumbo I've read in awhile. But the book that made me feel better? That one, and the genre it's in, gets sniffed at. SO FRUSTRATING.

Fixie is a really sweet and lovable character though. I absolutely adored reading as she grew a backbone and stood up to her family and the other jerks around her. I was sure Kinsella would give her a happy ending and I was rooting for it the whole way through the book.

The actual premise of this novel with all the IOUs is so much fun. I can just see Kinsella's mind working as she was likely thinking, "What if...." It's such a crazy chain of events that I enjoyed reading.

While I Owe You One didn't wow me like I know Sophie Kinsella can, I'm glad I read it. It's perfect for a time when you need to laugh.

*An egalley of this novel was provided by the publisher, Penguin Random House, in exchange for review consideration. All opinions are honest and my own.*
Posted by Books Etc. at 8:07 AM No comments: Links to this post