Review: Born Into It 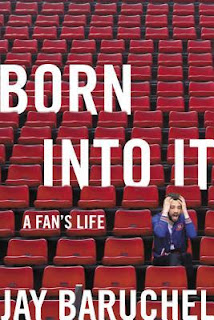 I'm not a Habs fan. The area I grew up bleeds the blue of the Toronto Maple Leafs and the city I live in now isn't much different (though being so close to the American border, there are a fair number of Buffalo Sabres fans around). I actually probably wouldn't even say I'm really a hockey fan. I'll watch a game if it's on and I am Canadian (yeah, that's kind of a true stereotype), and someone who pays attention to the sportsing world in general, so I'm sure know much more about hockey than the average person. I'm also always up for an entertaining memoir so I looked forward to diving into Born Into It by Jay Baruchel (yes, the actor Jay Baruchel). It did not disappoint.

Here's what this book is all about:


In The Game meets Goon, Montreal Canadiens superfan Jay Baruchel tells us why he loves the Habs no matter what
It’s no secret that Jay Baruchel is a die-hard fan of the Montreal Canadiens. He talks about the team at every opportunity, wears their gear proudly in interviews and on the street, appeared in a series of videos promoting the team, and was once named honorary captain by owner Geoff Molson and Habs tough guy Chris Nilan. As he has said publicly, “I was raised both Catholic and Jewish, but really more than anything just a Habs fan.”
In Born Into It, Baruchel’s lifelong memories as a Canadiens’ fan explode on the page in a collection of hilarious, heartfelt and nostalgic stories that draw on his childhood experiences as a homer living in Montreal and the enemy living in the Maple Leaf stronghold of Oshawa, Ontario. Knuckles drawn, and with the rouge, bleu et blanc emblazoned on just about every piece of clothing he owns, Baruchel shares all in the same spirit with which he laid his soul bare in his hugely popular Goon movies. Born Into It is a memoir unlike any other, and a book not to be missed.

I've known who Jay Baruchel is for a long time. (Hello, Popular Mechanics for Kids.) I probably could have also told you he's a Canadiens fan. I knew loves hockey, having seen Goon (note to self: get around to watching the second movie). So hearing he had written a book about being a Habs fan wasn't really all that surprising. What was surprising was how much I enjoyed it.

As I mentioned, I do like many sports and I therefore understand the dynamic of being an athlete and a fan of professional sports. I knew where Baruchel was coming from when he talked about how much he loved his team and the constant heartbreak he feels when they come up short every single season. There's just something about the world of sports fandom that is pretty much impossible to explain to anyone who doesn't watch or play any sport. There's a (ridiculous) emotional feeling and investment into your team. And because I get that, I had goosebumps often while reading this book.

I also wasn't really expecting to learn that Baruchel is basically a nerdy stoner. He talked often about smoking pot but also how he much he read growing up. It might be judgey of me but it was such a jarring (and amusing) image at first. This translated into some really amusing stories and many well-told ones. Not only does Baruchel get being a sports fan, he also understands how to weave a story which resulted in a really good read.

I do think you need to have at least some understanding of hockey if you're going to dive into this book. You'll get so much more out of it if you know the good ol' hockey game. Nowhere is this more evident when Baruchel writes a play by play of what's referred to as the Good Friday Massacre. I had never heard of it, having not been born yet and not being a Habs fan, so it was a new story for me. But because I have a sense of how hockey is played, I could totally follow along as Baruchel laid out exactly what happened in that ridiculously violent game. I'm not saying you can't read this if you're not a fan of hockey but know going in that some things might get a bit lost in translation.

Being the season of gift giving, I would wholeheartedly recommend Born Into It for the sports fan in your life. They don't need to be a Canadiens fan or even hugely into hockey to enjoy this one. I would tread lightly, however, if you plan to wrap it up for a die-hard Leafs or Bruins fan! (But seriously. It's a great gift idea.)

I laughed throughout reading Born Into It and I was glad to be a sports fan as well. Jay Baruchel has written a really great book about being a Montreal Canadiens fan and I think it's one worth reading for almost anyone.

*A copy of this book was provided by the publisher, HarperCollins Canada, in exchange for review consideration. All opinions are honest and my own.*
Posted by Books Etc. at 8:07 AM