Review: The Witch of Willow Hall 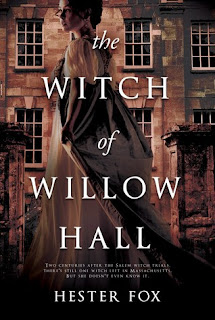 As much as I adore the Harry Potter novels, I usually like my witch stories to be a little more historical (think The Witches of New York) and/or feature more discreet magic (think Practical Magic - the book, not the movie). I was intrigued by The Witch of Willow Hall, Hester Fox's debut novel because it seemed like it would tie into the Salem Witch Trials and feature magic that was more, for lack of a better word, realistic than wand-waving. The magic that did show up was just what I wanted but I needed a lot more of it.


Take this as a warning: if you are not able or willing to control yourself, it will not only be you who suffers the consequences, but those around you, as well.
New Oldbury, 1821
In the wake of a scandal, the Montrose family and their three daughters—Catherine, Lydia and Emeline—flee Boston for their new country home, Willow Hall.
The estate seems sleepy and idyllic. But a subtle menace creeps into the atmosphere, remnants of a dark history that call to Lydia, and to the youngest, Emeline.
All three daughters will be irrevocably changed by what follows, but none more than Lydia, who must draw on a power she never knew she possessed if she wants to protect those she loves. For Willow Hall’s secrets will rise, in the end…

While I know some readers absolutely adored this novel, there was something was a little lacking for me. And I think it was the witchcraft - or lack thereof. Lydia has no idea what's happening to her. She doesn't know why she's seeing things that shouldn't be there or why things seem to happen without her meaning them to. She doesn't recognize it as magic and she fights it for the majority of the novel which means there really isn't much witchcraft in the book. It reads more like a Gothic ghost story than a story about a witch.

While there was a lack of witchcraft, there was an abundance of sibling rivalry. The drama between Lydia and her older sister, Catherine, took over the story. This would be fine if it hadn't been for the expectation that the story would be more about witches than two sisters sniping at each other for 300+ pages.

The girls (I say girls but they were actually, I think, young ladies. Lydia is mentioned as being 19 and Catherine was older but I definitely wasn't sure and kept thinking of them as much younger for some reason) were also competing for the attention of a young (maybe he wasn't young? I apparently didn't do well on paying attention to the ages of these characters) man. Catherine had a reason (completely and totally messed up but a reason nonetheless) to snag herself a husband and she wasn't being picky. Lydia, on the other hand, was experiencing love that she was certain was unrequited. For a storyline that wasn't mentioned in the synopsis, these romantic (and not so romantic) entanglements take up a lot of the novel. (I'm sorry for all the brackets.)

As hard as I may be on the story, mostly for lacking the witchcraft I really wanted, the story was a good one. I was invested and needed to keep reading to find out how things would end up for Lydia. I felt the ups and downs and whatever else she was feeling right alongside her and hoped she would find a Happily Ever After, or as happy as it could be considering the circumstances.

In reading the author bio at the back of the book, I learned Fox had a background in history and worked as a collections maintenance technician at a museum. That love of history came through as I really felt like I was in 1821. Sometimes historical novels can seem too much like a history textbook but Fox sets the scene without making it seem like she's trying to teach the reader anything. You're completely absorbed in the world she creates.

The Witch of Willow Hall was a good book to read on a Fall weekend (even though we had unseasonably warm temperatures this past Thanksgiving weekend). Even though I wish Hester Fox had given readers more witches and fewer ghosts, I think this is a perfectly Gothic novel to read in the lead up to Halloween.

*A copy of this novel was provided by the publishers, Harlequin, in exchange for review consideration. All opinions are honest and my own.*
Posted by Books Etc. at 8:02 AM