Cover Reveal: At the Mountain's Edge 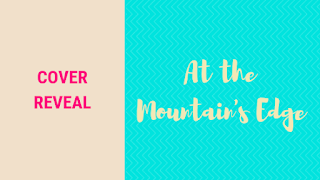 It seems like I've been gushing over Genevieve Graham's books for ages but I've only been reading her novels since July 2017 (when I posted my review of Promises to Keep). But since then I've also read Tides of Honour (which was published back in 2015) and Come from Away (I reviewed that one too) and Graham has found herself firmly on my "must-read" list. She writes these stunning historical novels that are just amazing. She tells such a good story and shares pieces of Canadian history that a lot of us have either forgotten (due to not paying attention in booooring history class) or never known. It's a remarkable talent and I urge all of you to check out her books.

But why am I gushing about her now? Because she has a new book coming out in April 2019 *flails* At the Mountain's Edge is her first novel to be set outside of Nova Scotia and I'm really looking forward to experiencing another part of Canada's history through Graham's characters.

Here's what the novel will be about:


From bestselling author Genevieve Graham comes a sweeping new historical novel of love, tragedy, and redemption set during the height of the Klondike Gold Rush.
In 1897, the discovery of gold in the desolate reaches of the Yukon has the world abuzz with excitement, and thousands of prospectors swarm to the north seeking riches the likes of which have never been seen before.
For Liza Peterson and her family, the gold rush is a chance for them to make a fortune by moving their general store business from Vancouver to Dawson City, the only established town in the Yukon. For Constable Ben Turner, a recent recruit of the North-West Mounted Police, upholding the law in a place overrun with guns, liquor, prostitutes, and thieves is an opportunity to escape a dark past and become the man of integrity he has always wanted to be. But the long, difficult journey over icy mountain passes and whitewater rapids is much more treacherous than Liza or Ben imagined, and neither is completely prepared for the forbidding north.
As Liza’s family nears the mountain’s peak, a catastrophe strikes with fatal consequences, and not even the NWMP can help. Alone and desperate, Liza finally reaches Dawson City, only to find herself in a different kind of peril. Meanwhile, Ben, wracked with guilt over the accident on the trail, sees the chance to make things right. But just as love begins to grow, new dangers arise, threatening to separate the couple forever.
Inspired by history as rich as the Klondike’s gold, At the Mountain’s Edge is an epic tale of romance and adventure about two people who must let go of the past not only to be together, but also to survive.

Does that not sound delightful? Except for the whole "catastrophe" part. That doesn't sound so delightful. But the rest of it? Oh, it'll be so good.

Are you ready for the whole reason of this post? To share the gorgeousness that is the cover? Thought so. 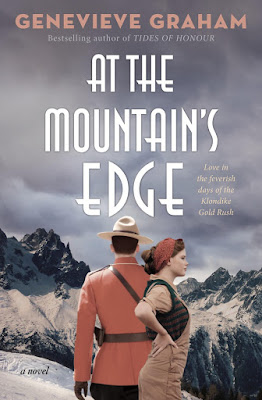 Pretty stunning, isn't it? The mountains are definitely both majestic and dangerous.

What I (and Graham) love is that the cover designers are sticking with a similar theme with her books. They all have the same feel and look but they're all quite different as well. You'll notice either uniforms and/or the background to showcase the unique characters and nature of each book.

I don't know about you but I'll be counting down the days until this one is released. And if you want to preorder or find the book and Graham around the interwebs, I've got you covered.

If you haven't picked up Genevieve Graham's books, do it. You have plenty of time to work your way through her backlist before At the Mountain's Edge releases in April.