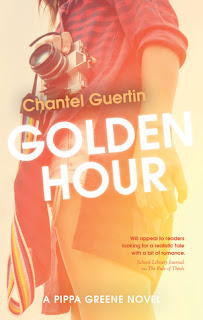 It seemed like I had been waiting forever for the next book in Chantel Guertin's Pippa Greene series. But now that Golden Hour is finally here, I'm a bit sad. It's the fourth and final book in the series and I'm not sure I'm ready to say goodbye to Pippa.


It’s senior year, and the college countdown is on. But instead of getting accepted to Tisch’s photography program, Pippa’s been waitlisted. Without a backup plan, and with the pressure from everyone around her to live up to her father’s legacy, Pippa sets out to prove herself worthy of the program by doing the opposite of everything she did to try to get in. But when she runs into her ex, and first love, Dylan McCutter, Pippa has to finally decide if she should follow her head or her heart.
Written with the same humor and heart that made Chantel Guertin’s first three Pippa Greene novels instant favorites, Golden Hour offers a fresh and charming perspective on friendships, family, and first love.

The book had a bit of a Jenny Han feeling to it. I think it reminded me a lot of Always and Forever, Lara Jean because Pippa and Lara Jean aren't too different in character. Also, both of the final books in each series had the main characters figuring out what life after high school was going to look like. So, basically, what I'm saying is: if you like Lara Jean and Jenny Han's books, you'll also like Pippa.

Pippa is a smart girl but she's still a teenager so she makes some questionable choices. I put myself into a mindset of a grade 12 student (a senior for you Americans) and went along for the ride. She knows what she should be doing but that doesn't necessarily mean that's what she wants to be doing. Pippa figured out a lot about life in this one and how being true to yourself is going to make for such a better life than trying to be someone or something you think you should be.

I kind of laughed at myself when I realized I was questioning the motivations of the adults and wondering where the hell they were when they didn't realize that Pippa had only applied to one college. But then I remembered that I'm supposed to be an "adult" and I probably would have trusted Pippa too and moved on to worrying about my own life. But, seriously, Pippa? One school?

I almost wish Dylan hadn't reappeared because I wanted Pippa to focus on her own life and figuring her stuff out. I know that's not what life is like sometimes (hello, I started dating someone two weeks before graduation and decided to try the long distance thing so clearly I was doing both the romance and life figuring out at the same time. We're still together, btw.) but I do wish that novels didn't always have to have some sort of love story. Is it really necessary to sell books?

All in all, I liked Golden Hour. I adore Pippa and kind of really want to find out what she'd be like as an adult because I'm pretty sure we'd be friends. I'm looking forward to whatever Chantel Guertin writes next even though I'll be missing Pippa for awhile. Now that the whole series is out, it's a perfect time to read all of them back to back. And they'd make a great gift for any teen readers in your life for a summer reading project!

PS Definitely check out my friend Jess' review of this book as well over on her blog, The Paper-Trail Diary. She has a lot of the same thoughts I did and puts them together much better than I think I did.

*A copy of this novel was sent by the publisher, ECW Press, in exchange for review consideration. All opinions are honest and my own.*
Posted by Books Etc. at 8:03 AM No comments: Links to this post 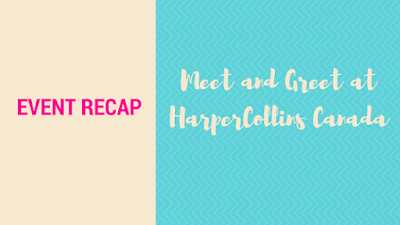 Last month I had the chance to attend a meet and greet event at the new HarperCollins Canada offices in downtown Toronto. I live outside of the city so I can't often make it in to evening events on a weekday. However, I have a new job and we have a Toronto office so I made plans to work there for the day so I could walk a few blocks over to the event after work. Win all around!

I was excited for the event for all sorts of reasons. One was that I hadn't seen the new HarperCollins offices yet. A few fellow YA bloggers had been to a Frenzy event and I was a bit envious of the views they had. I settled myself into a window seat at the event, not really thinking about my fear of heights. Probably not the wisest decision as this was the view: 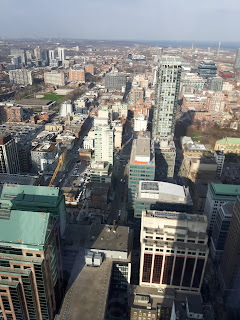 Pretty incredible though, right? I just kept telling myself not to look all the way down (after I had snapped this shot, of course) which was easier said than done as the windows were floor to ceiling. Amazing but a bit fear inducing for me!

The authors being featured at this event (which took place on May 2) were Joanna Goodman and Ellen Keith. Both women had recently published historical fiction novels. Joanna's, The Home for Unwanted Girls, released on April 17th and Ellen's, The Dutch Wife, on April 24th. The books were new but I had read both for Niagara Life, a magazine I review for. I really enjoyed both of them so I jumped at the chance to hear them speak and get signed copies of both books.

Check out the synopsis of each book on Goodreads:
The Home for Unwanted Girls
The Dutch Wife

I wasn't the only one who enjoyed these books either. Both women debuted on The Globe and Mail bestseller lists. Joanna at number 1 the week her book came out and Ellen, a week later, at number 2. How amazing is that?

One of the best things I learned from the talk was that both women fell down a bit of a research rabbit hole while working on their books. Joanna knew she wanted to tell a story of a woman giving up her baby in 1950s Quebec and Ellen wanted to give a Nazi a chance to tell their perspective of WWII. Ellen had done some traveling in Germany and wondered how they were being taught the history of the war compared to what we may be told over here in North America. Both women's vague ideas were made so much richer by the research they found. Joanna's research led her to Duplessis Orphans (check out Wikipedia for a brief overview). Ellen learned about what happened in Argentina during the Dirty War plus about the brothels at prison and labour camps during WWII.

Joanna said that she'd been working on this book for "half her life" and found it very difficult to find first-hand accounts of the orphans. She said it wasn't surprising because the children would not have received a formal education so their literacy would be limited. She did find one instance where a child had put together her story and talked to a journalist who, in turn, published an article. Joanna said that it was so helpful finding that book because it confirmed the perspective she had of the orphans.

The women were asked if there was a pressure to tell their historical stories "correctly" and they both responded with a strong yes. Ellen said she was terrified that someone would come and tell her that she got it all wrong. Joanna agreed. Joanna was less concerned with the factual errors or inconsistencies than with the emotional ones. She just didn't know exactly how the orphans would have felt. Ellen has a history degree and found herself getting too focused on getting every little detail right and she didn't know how to handle the gaps in the research. In the end she learned that the novel should be more about the heart and essence of what you're trying to communicate than cold, hard facts.

The authors also went into more detail on how, exactly, the first seeds of their story were planted. Joanna's novel was kind of her mother's story and Maggie was written almost entirely as her mother (apart from the giving up a baby part of the novel). It was bittersweet for Joanna as her mom passed away before the book was published. Ellen wanted to write an homage to her grandparents who lived in the Netherlands during the war. While Marijka is spunky just like Ellen's grandmother was, Ellen's heroine is not really based on anyone in particular.

As is inevitable at events such as this, someone asked what advice the women would give to aspiring authors. Ellen said to never, ever give up. She also suggests finding other people who love reading and writing and have them read your work. That really helped keep her going. Joanna absolutely agreed and added that you need to have a thick skin as you'll have to learn to ignore every rejection. She also said that writing workshops have been the best thing for her career. Both women shared stories that showed how finding people you trust can be the best thing for your writing as they have more distance from the work itself and can sometimes provide a better perspective.

It was a wonderful evening and I'm very thankful HarperCollins Canada allowed me to take part in the event. We all got a copy of each book and had the chance to have them signed by Ellen and Joanna. It was nice to have a quick moment to chat with each other where I could tell them I really enjoyed their novels. Joanna also let me know, once she learned where I was from, that she should have a couple of events in Niagara in the fall so I'm looking forward to that!

Posted by Books Etc. at 8:02 AM No comments: Links to this post