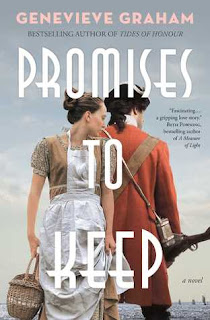 Like most Canadian kids, I learned about our country's history in school. And, again like most kids, I was bored. I remember hearing about the Acadians but I wouldn't be able to tell you more than they had some French ties and lived on the East coast. Genevieve Graham's newest novel, Promises to Keep, shows what it would have been like for a family of Acadians when the British came to take over their land. It's a heartbreaking tale with uplifting moments and, most importantly, so very interesting. This is my third stop on Simon & Schuster Canada's Timeless Tour - have you been following along?

Young, beautiful Amélie Belliveau lives with her family among the Acadians of Grande Pré, Nova Scotia, content with her life on their idyllic farm. Along with their friends, the neighbouring Mi’kmaq, the community believes they can remain on neutral political ground despite the rising tides of war. But peace can be fragile, and sometimes faith is not enough. When the Acadians refuse to pledge allegiance to the British in their war against the French, the army invades Grande Pré, claims the land, and rips the people from their homes. Amélie’s entire family, alongside the other Acadians, is exiled to ports unknown aboard dilapidated ships.

Fortunately, Amélie has made a powerful ally. Having survived his own harrowing experience at the hands of the English, Corporal Connor MacDonnell is a reluctant participant in the British plan to expel the Acadians from their homeland. His sympathy for Amélie gradually evolves into a profound love, and he resolves to help her and her family in any way he can—even if it means treason. As the last warmth of summer fades, more ships arrive to ferry the Acadians away, and Connor is forced to make a decision that will alter the future forever.

Heart-wrenching and captivating, Promises to Keep is a gloriously romantic tale of a young couple forced to risk everything amidst the uncertainties of war.

Promises to Keep takes place during a time of war and, as the synopsis so accurately pointed out, it's totally heart-wrenching. I felt like my heart was breaking for the last third of the book. For a girl who loves her Happily Ever Afters, that's a tough story to read. As someone who knows history was not kind to many people and war is hard, I understood why so many terrible, awful things had to happen over the course of the novel.

Over the last few years I've gotten in the habit of reading the acknowledgments at the end of the book. I admit it started because I became friends with more authors and my name started popping up but that made me realize that every name in every acknowledgment is important. It's especially great to read them when the book is a historical novel as the author will often discuss their research and the reasons why they've focused on a particular subject. That was the case with Graham. She wrote about how many people, including Canadians, think our history is boring. I'll admit I'm one of them. History classes in school could never hold my interest for very long even though I knew, on some level, it had to be better than textbooks and memorizing dates. Graham says, (and I absolutely adore this),

"Our stories are just waiting to be written, and they need to be written so people will want to read and learn more. Often that means they require fictional reimagining and that's where I come in. My goal, my passion, is to breathe life back into Canadian history."

Well, Ms. Graham. You've done it. You managed to completely capture my interest and, as I said, made me realize that I don't remember much about the Acadians and that needs to change. So, thank you.

Amélie is a fantastic heroine. She is tough, she is smart, she is loving. I'd like to think I'd handle being thrown off my family's land with half as much strength as she did (that's not to say she never felt defeated because she definitely did), but I don't think I'd be able to handle it. She stayed strong for her family (her elder sister had bursts of strength as well and, in those moments especially, I really wanted to know more of how Claire was really faring) and did everything in her power to put her family back together again.

I really enjoyed reading Promises to Keep. Genevieve Graham's latest book was one I didn't want to put down. It has a wonderful storyline, excellent writing, and characters whose lives will grab you and won't want to let you go. Now, if you'll excuse me, I'm going to have to look up Graham's other novel Tides of Honour!

Make sure you follow along with the blog tour! You can check out the Timeless Tours site and the graphic below for more details. 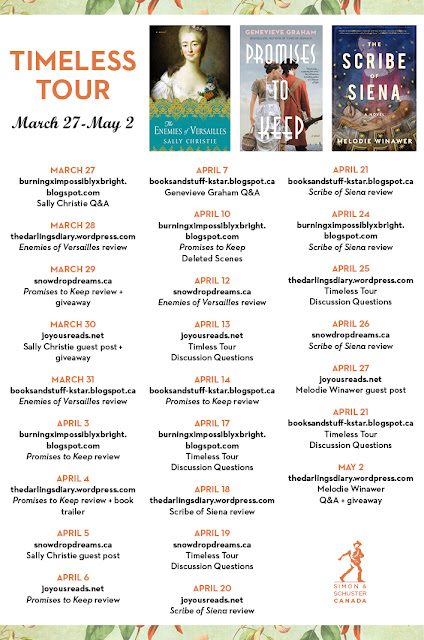 *An ARC of this book was provided by the publisher, Simon & Schuster Canada, in exchange for a review for the purpose of a blog tour. All opinions are honest and my own.*
Posted by Books Etc. at 7:35 AM