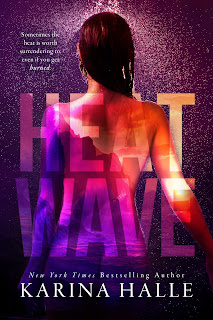 Karina Halle is, by far, one of my favourite contemporary authors. I'll read pretty much anything she writes and was thrilled when I heard what Halle's latest novel, Heat Wave, was all about. The good news was the story lived up to the synopsis!

Speaking of the synopsis, here's what this new novel is all about:

They say when life closes one door, another one opens.This door happens to lead to paradise.And a man I can never, ever have. Still grieving the loss of her sister who died two years ago, the last thing Veronica "Ronnie" Locke needed was to lose her job at one of Chicago’s finest restaurants and have to move back in with her parents. So when a window of opportunity opens for her – running a kitchen at a small Hawaiian hotel – she’d be crazy not to take it. The only problem is, the man running the hotel drives her crazy:Logan Shephard.It doesn’t matter that he’s got dark brown eyes, a tall, muscular build that’s sculpted from daily surfing sessions, and a deep Australian accent that makes your toes curl.What does matter is that he’s a grump.Kind of an asshole, too.And gets under Ronnie’s skin like no one else. But the more time Ronnie spends on the island of Kauai, falling in love with the lush land and its carefree lifestyle, the closer she gets to Logan. And the closer she gets to Logan, the more she realizes she may have pegged him all wrong. Maybe it’s the hot, steamy jungles or the invigorating ocean air, but soon their relationship becomes utterly intoxicating. There’s just one major catch. The two of them together would incite a scandal neither Ronnie, nor her family, would ever recover from. Forbidden, Illicit, off-limits – sometimes the heat is worth surrendering to, even if you get burned.

My absolute favourite thing about Halle's books is she features such real and flawed characters. Too many novels are all about pretty much perfect characters and that's kind of boring. Halle's characters have deep issues they need to work out over the course of the novel.

Those flaws and issues make for a totally heart-wrenching read - especially in the case of Heat Wave. I don't usually enjoy feeling anxious (who does?) but the emotions I was feeling mirrored the characters' and that made my reading so much better. Halle does such an amazing job of really making you feel what her characters are feeling.

I've always wanted to go to Hawaii and this book did not help my wanderlust! :) Hawaii and Moonwater are almost other characters in this novel. I loved picturing where the characters were and it didn't matter that I've never been to Hawaii. Halle sets the stage so well so I really did feel like I was there with Veronica and Logan and the rest of the Moonwater crew. Speaking of the Moonwater crew...I adored the whole idea of making your own family. The group at the hotel were so great. They really were ohana.

I can't end a review about a Halle novel without discussing the romantic relationship. She's written steamy scenes before but, holy monkey, I don't think I've read anything that steamy from her before. *fans self* Of course, the relationship between Veronica and Logan is more than just sex and Halle is able to make the reader see what it is that makes the pair drawn to each other despite the massive obstacles in their way.

Overall, Heat Wave was a fantastic read. I'd definitely recommend it to every contemporary reader - especially those who love books set in travel destinations. Read it! Meanwhile, I'll be over here not-so-patiently waiting for Karina Halle's next novel!

*An eARC of this novel was provided by the author and publicist in exchange for an honest review as part of a blog tour. All opinions are honest and my own.*
Posted by Books Etc. at 8:18 AM