Readalong: Startled by His Furry Shorts and Love Is a Many Trousered Thing 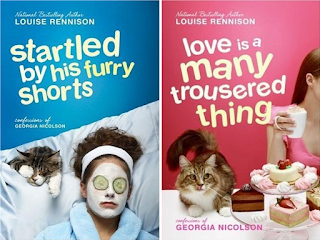 I'm very behind on the Georgia Nicolson Readalong! (More on the readalong here at The Paper Trail Diary). But, I have a good (ish) reason. I've been requesting each book from my library to show up at the branch closest to my house and they've all shown up within a couple of days. I asked for Startled by His Furry Shorts...and waited...and waited...and waited. Finally I check my account and the catalogue and realize, horror upon horrors, the book is lost! I'm not surprised the library didn't know it was missing - it's a ten year old book, after all - but I was annoyed that I didn't know sooner because the interlibrary home took forever to arrive so I didn't get it read in time. Ah well.

I'm not going to include the synopsis for both books - it'd take up too much space - so check out the Goodreads page for book seven and eight for a description of each novel.

Honestly, I've completely forgotten what happens in Startled by His Furry Shorts. The main thing is Georgia's school performing MacBeth (or MacUseless as the Ace Gang calls it). It was pretty amusing reading the differences between the girls and how they approached the play. Georgia, as you could expect, couldn't care less about "Billy" Shakespeare. Jas, on the other hand, took her role as Lady MacUseless very seriously. Dave the Laugh and his mates help out with the play so Georgia has many confusing encounters with him. It's something I feel with every book, but I wish she'd realize that Dave is a solid (yet annoying) guy who is so much better for her than the Sex God or the Luuurve God.

I say Dave is annoying not because he is, exactly, but because I am 29 and he is a teenager. I totally understand Georgia's dilemma though. Two really good looking guys are into her and she's so blinded by their looks and interest and cool factor that she doesn't realize the steady, funny guy (who, by the way, is her own age) is the best for her. Ah, the things we don't understand as teenagers :) Though I hated that he called the Ace Gang his bitches (page 85 of SbHFS)

There were quite a few lines that had me giggling out loud while reading Startled by His Furry Shorts but I've realized they require too much context to share. So, I shall just say that I laughed throughout. :)

There continues to be unfortunate and constant nunga-nunga ogling from the younger boys Georgia encounters. In a way, I'm glad Rennison includes this kind of thing because it shows that teenage boys are idiots and always have been. But, for the most part, Georgia and the Ace Gang don't seem to be offended by the rude comments the boys make. They're annoyed, sure, but I don't think they realize how awful they're being. Though I doubt I would have been that conscious of this sort of sexism when I was a teen.

There are also way too many negative comments about gays and lesbians. Sigh. I find I'm skipping over these comments after an inner groan because they just keep happening. I'll have to just keep reminding myself that these books are 10+ years old (not that that's any excuse).

Finally, on the negative side, I am still frustrated at Jas who is still constantly implying Georgia is a tart for kissing all sorts of boys and not knowing who she likes. The slut shaming is hard to ignore. Teenage girls can really suck. :(

Getting back to the plot...there isn't much of one in Love is a Many Trousered Thing. Robbie (who surprised her and came home from New Zealand at the end of SbHFS) and Masimo are vying for Georgia's affection and Dave the Laugh won't get out of her head. There are, randomly, new Ace Gang trainee members (where did they come from all of a sudden and why are they there?). The big event in LiaMTT is a two night class camping trip. If you thought Georgia was less than thrilled about this you would be right. You could kind of see her finding some aspects of it fun though, which was nice.

I'm pretty sure I hadn't read Love is a Many Trousered Thing before so I'm looking forward to reading the next two books. Gosh. Only two more. I can't believe it!

I'm going to leave you with the most ridiculous and corny joke Rosie tells Georgia.
What do you call a French man in sandals?
Philippe Philoppe.

The next book we'll be reading is Stop in the Name of Pants! and we'll be chatting about it on September 6. 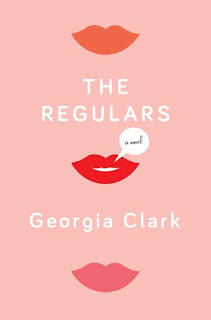 I wasn't sure what to expect with The Regulars, Georgia Clark's new novel. What I ended up getting was an entertaining, thought-provoking, feminist novel that I did not want to put down. Bonus: it had a hint of magic which I loved and which, I think, makes it a novel that will stand out from the all the other books about twentysomethings in NYC.


Best friends Evie, Krista, and Willow are just trying to make it through their mid-twenties in New York. They’re regular girls, with average looks and typical quarter-life crises: making it up the corporate ladder, making sense of online dating, and making rent.
Until they come across Pretty, a magic tincture that makes them, well...gorgeous. Like, supermodel gorgeous. And it’s certainly not their fault if the sudden gift of beauty causes unexpected doors to open for them.
But there’s a dark side to Pretty, too, and as the gloss fades for these modern-day Cinderellas, there’s just one question left:
What would you sacrifice to be Pretty?

It's been too long since I've read a contemporary novel with a magical twist. I hadn't realized I was missing stories like this! Everything about this novel is placed in reality - except for Pretty and it's side effects. I loved fantasy books as a kid but, as I got older, I found I wasn't reading them nearly as often. So, when I find a book like The Regulars, I'm pretty happy and it makes me want to look into more magic realism type stories. (Suggestions welcome!) Although...I have to say the way the girls turn pretty after taking the potion is...well, it's ridiculous. I'm not going to go into it because it's, er, messy, but even I found it far-fetched and unnecessary.

There were a few things that I wished had been wrapped up or, at the very least, not glossed over. For example, Krista is an actress and when her supermodel gorgeous alter ego, Lenka, gets hired for a movie, she gives the HR department her, Krista's, social so she can get paid. The girls say that's probably fine because she can just say Lenka is a stage name. But (slight spoiler but you'll see it coming), Evie-as-Chloe gets hired to be the host for the webseries the magazine Evie works for is starting. There is no mention, that I found anyway, of her getting paid. I wouldn't have even noticed this if it hadn't been for Krista's comment. Also, Penny is the woman who gives Krista Pretty and her storyline is left wide open and that frustrated me. Mostly because I wanted to make sure she was OK (she was not in a good place). And what exactly did Jan and Marcello know? I feel like there were hints that maybe they knew about Pretty but nothing was ever really brought to light.

Those looking for sexually diverse characters should take note of this novel. Evie, who is sort of the main heroine, is bisexual. And you know what's great about this book? Her sexual orientation is Not a Big Deal. Is this because Clark herself is gay? (She thanks her partner in the acknowledgements.) Maybe. But equally likely is that the book world is slowly embracing different characters and allowing them out into the world.

Final verdict? The Regulars was a good read. It has a few tiny issues (almost every book does) but it was fun, fresh, and full of flawed characters (which is great because, let's face it, we're all flawed.) Most of all, it's wicked smart. I should caution that is not a book for everyone. If you have to have likeable characters and cannot stand crude humour or sex scenes, skip this book. In the acknowledgements, Georgia Clark says her book was pitched as a "feminist fairy tale" and I absolutely love that. It's exactly the best way to describe it!

*An ARC of this novel was provided by Simon & Schuster Canada in exchange for review consideration.*
Posted by Books Etc. at 7:37 AM 1 comment: Links to this post