Readalong: Away Laughing on a Fast Camel 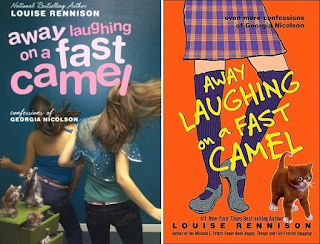 I can't believe we're already on the fifth book of the Georgia Nicholson Readalong! (More on Paper Trail Diary's idea here.) I had been feeling a bit blah about the series for the last couple of books - mostly getting more annoyed with Georgia's immaturity and wondering if anything was actually going to happen in the books. Happily, I found myself getting back into the groove with Away Laughing on a a Fast Camel. Sure there are still many issues but I had more fun reading this one than I had with the last couple.


The Sex God has left the country, taking Georgia's heart with him. So she decides to display glaciosity to all boys -- a girl can only have her heart broken so many times.
Until she meets Masimo, the new singer for the Stiff Dylans. The Sex God is gone, but here comes the Dreamboat, and Georgia's away laughing on a fast camel (whatever that means).

I remember always liking Dave the Laugh when I first read the books but I'm not liking him as much as I used to. I know I'm older now so that has a lot to do with it, but it's still frustrating to read about a boy telling a girl he clearly likes that his Cosmic Horn (basically: liking and wanting to snog many individuals instead of dating and snogging just one person) is due to his teenage boy hormones. I mean, he's not lying, but he just keeps falling back on the "I'm a teenager! I'm full of hormones! My need to date and make out with everyone is not my fault!" and it gets a bit tiresome. I do, however, appreciate that he realizes Mark (who Georgia dated briefly back in book one) was way off base when he tried to shame Georgia and called her a tease for not wanting to have sex with him when all they were doing was kissing.

Actually, this is a moment I want to explore more. To set the scene a little bit: Georgia had run into Mark and he told her to meet him later that evening. She goes even though she doesn't have any particular feelings for him. They end up kissing and then Mark sticks his hand down Georgia's shirt:


[I]t gave me such a shock that I jumped back and Mark was left off balance; he stumbled into the bushes. He came out a minute later covered in twigs. He didn't look pleased.
He said, "What did you do that for?"
I said, "Well. Er, it was all a bit...I don't know that I want you to..."
He lit a fag and said, "What did you come here for...a chat?"
I said, "Well...I..."
What did I come here for? Very good question. Excellent point, well made. Boredom mostly, I suppose. I didn't think I should say that. Mark seemed really angry. He said, 'Do you go all the way or not?'
I said, "Well, no I..."
Mark started walking off. "Girls like you make me sick."
And he was gone. I was left at the top the hill alone. What had I done now? I felt really weird. And lonely.

I'm glad Rennison included a scene like this in the book because it's something that happens in real life. What I don't love is that Georgia doesn't get to have a moment where she realizes that it's not her fault. She didn't do anything, even though she thinks she has. Mark's anger is never discussed and the whole problem is dealt with by Dave beating Mark up. Maybe I'm expecting too much of a YA book but I just feel that the whole situation could have been dealt with better. Which brings me to another issue that's tied into this one...

Georgia is starting to worry that she's doing something to lead on boys (again: she's not. She just apparently attracts idiots. But who doesn't when they're in high school?). It doesn't help that Jas, Georgia's very best friend, continues to have troubling views on this matter. She kinda sorta slut shames Georgia and it drives me bananas. Kissing lots of boys is not a problem and I hate that Georgia's friend is making it seem like it is. (OK, I might be projecting a bit because I definitely kissed a lot of boys in high school and I know some of my friends thought negatively of me. This may be the only thing from high school I have yet to let go of...11 years after graduation...lol.) Anyway. I don't like to see girls judging other girls like this, especially not when they're supposed to be best friends.

I found myself giggling a lot more in this book than I had with the last couple. I don't have any specific examples, since I was read a lot of this book at the gym (it's hard to take pics of good lines when you're doing cardio, let me tell you). Georgia continues to come up with the most outlandish ideas (like spying on The Stiff Dylans and their new singer during their rehearsal and having to tuck her skirt into her knickers when she climbs a box to look into the venue) and has tons of cringeworthy moments (note to self: never reapply eyelash glue while out at a concert otherwise you might end up sticking your eyelashes together).

Overall, I definitely had fun reading Away Laughing on a Fast Camel and am feeling excited about this readalong again. Yay! Coming up next is Then He Ate My Boy Entrancers. We'll be chatting about book five on July 5...and hopefully reminding myself that the "he" who ate the boy entrancers (fake eyelashes, as we learned in book four), was Georgia's cat Angus or kitten Gordy and not any human he. 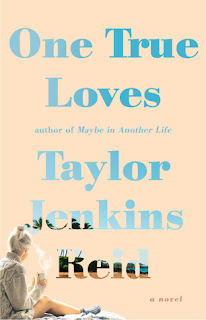 I was lucky enough to receive an ARC of Taylor Jenkins Reid's newest book, One True Loves, a few months back. I had put off reading it because I knew it was going to be great and I knew I'd be sad once it was over. Finally the perfect reading moment presented itself: the afternoon of my birthday a couple of weeks ago. I read the book in essentially one sitting and I absolutely adored it. Jenkins Reid has written another stunning novel.

Here's the synopsis of One True Loves:

In her twenties, Emma Blair marries her high school sweetheart, Jesse. They build a life for themselves, far away from the expectations of their parents and the people of their hometown in Massachusetts. They travel the world together, living life to the fullest and seizing every opportunity for adventure.
On their first wedding anniversary, Jesse is on a helicopter over the Pacific when it goes missing. Just like that, Jesse is gone forever.
Emma quits her job and moves home in an effort to put her life back together. Years later, now in her thirties, Emma runs into an old friend, Sam, and finds herself falling in love again. When Emma and Sam get engaged, it feels like Emma’s second chance at happiness.
That is, until Jesse is found. He’s alive, and he’s been trying all these years to come home to her. With a husband and a fiancé, Emma has to now figure out who she is and what she wants, while trying to protect the ones she loves.
Who is her one true love? What does it mean to love truly?
Emma knows she has to listen to her heart. She’s just not sure what it’s saying.

Jenkins Reid always (well, I say always even though I still haven't read her first two novels...I even own them...there are zero excuses) writes about some element of marriage and relationships that I feel other authors shy away from. In her latest book, Emma is put in an impossible situation. How on earth do you even begin to figure out where your head and heart are at when your presumed dead husband shows up a few months before your second wedding? How do you deal with having a husband and a fiancé? I think Emma handles it pretty well. It's messy and pretty much everyone gets hurt...but I think she did the best she could have in that situation. (Vague? Yes. Just read the book.)

I liked how the book was written. Right off the bat you find out that Emma is engaged and then gets a phone call from her husband. Then we go back in time to when Emma was a teen and first meets Jesse. The book moves forward in stages (like, Before: Emma and Jesse, Or how to fall in love and fall to pieces) until you get to a few weeks after the phone call from the start of the novel. I liked that we got the main bombshell right away and then Jenkins Reid pulled back to give context. It drives me bonkers when there's supposed to be a big secret and then it's finally revealed and I'm all, "Yeah. I know. I figured this out 100 pages ago. Move on." (That doesn't always happen of course but there are genres where bombshells work and authors who are better at revealing and concealing. I haven't found many chick lit/contemporary/women's fiction authors who do it well.)

One True Loves took hold of my heart right away and did not let go...not even after I finished the last page. I was so incredibly invested in Emma's life and I wished I could hop into the book and find a way to ease the pain she, Sam, and Jesse were all feeling. I loved that I felt everything the characters were feeling in this book (and yes, I did find myself tearing up a time or two). I loved the story, I love the cover, I love pretty much everything about this book. I think everyone should read it at some point this summer. Either on the beach or in the backyard or at the cottage. Anywhere. Just read it.

*An ARC of this novel was provided by the publisher, Simon & Schuster Canada, in exchange for review consideration. All opinions are honest and my own.*
Posted by Books Etc. at 7:03 AM No comments: Links to this post