Review: The Way I Used to Be 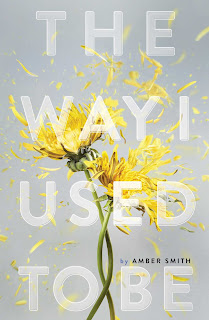 You probably all know by now that while I may be a fierce Young Adult fiction defender I don't read a ton of it myself. Every once and awhile, though, I come across a YA novel that intrigues me. The Way I Used to Be

was one of those books. I was hooked as soon as I read the synopsis - wary, yes, but mostly hooked - and I knew I wanted to read it. Amber Smith's debut novel broke my heart but I adored it.


In the tradition of Speak, this extraordinary debut novel shares the unforgettable story of a young woman as she struggles to find strength in the aftermath of an assault.
Eden was always good at being good. Starting high school didn’t change who she was. But the night her brother’s best friend rapes her, Eden’s world capsizes.
What was once simple, is now complex. What Eden once loved—who she once loved—she now hates. What she thought she knew to be true, is now lies. Nothing makes sense anymore, and she knows she’s supposed to tell someone what happened but she can’t. So she buries it instead. And she buries the way she used to be.
Told in four parts—freshman, sophomore, junior, and senior year—this provocative debut reveals the deep cuts of trauma. But it also demonstrates one young woman’s strength as she navigates the disappointment and unbearable pains of adolescence, of first love and first heartbreak, of friendships broken and rebuilt, and while learning to embrace a power of survival she never knew she had hidden within her heart.

Sounds pretty heavy, doesn't it? It was. But in a great way. (OK, "great" might be the wrong word but you know what I mean. I hope.) Smith doesn't build up to the rape. The story opens just after it's occurred and has Eden trying to figure out what happened, pretend it didn't happen, and decide what to do next. When Eden's mom comes in her room and sees the blood on the bed sheets she assumes Eden got her period overnight and proceeds to give her advice on counting days, etc. so she can avoid another accident. Eden is shocked (and, likely, still in shock) and doesn't tell her mother the truth - then or for the next four years.

One of the (many) things to break my heart while reading this book was that Eden's parents just don't pay that much attention to her. All Eden wants, over the four years following the rape, is for someone to ask, outright, if she was ok and if something happened. But her parents don't ask. They just think she's going through a typical teenage rebellious stage and try to wait it out.

As the synopsis mentioned, the book is divided into four sections, one for each year of high school. I was happy with this set up...for the most part. It was really good to see Eden through every stage of high school and how her relationships (with her friends and with guys) changed as time went on. And also how her relationship with herself changed. But, this isn't a very large novel so there isn't a lot of room to go into everything in every year.. That usually worked. My problem was it sometimes seemed like time was moving too fast and/or I wasn't even sure how much time had passed until Smith mentioned a holiday or specific month. (And she did that in really good, subtle ways, which may seem contradictory.) The other thing that didn't really help this sense of time was the middle two parts, sophomore and junior years, were longer and almost seemed to drag a little bit. Not enough to completely altar my view of the novel, but just enough to warrant a mention. It's worth it to stick it out, trust me.

I don't even think I could tell you every emotion I felt while reading this book. There were a lot of them and they were so strong. I felt like screaming with rage and crying with sadness. I wanted to reach through the pages and tell Eden that it was all going to be ok. I didn't know how but I needed so badly to make things better for her. It made me glad that, at the moment, I don't want kids and therefore won't have a daughter who might go through this. I was worried for my friend's daughter for when she gets to high school and has to deal with who knows what. And I was thankful, oh so thankful, that nothing like this ever happened to me in high school. But I was also worried - how did I judge other girls when I was a teen? Was there anyone I knew who went through something like this? Who do I know that has never told anyone about a rape or sexual assault? How can I make things better? How can I make myself a better person? So, yeah. Many feelings. I actually read the end of the book at the gym and I can only imagine the emotions that were playing across my face. I was gripping the book so hard as I was on the bike and had to keep telling myself that the gym is not the place to have tears streaming down your face because of the emotions you're feeling for a fictional character. But even though all of these things were heart wrenching and felt like a punch to the gut (over and over and over again), I wouldn't change a thing. I needed to feel those things to fully appreciate this book.

The Way I Used to Be was such a great book, even if it was incredibly hard to read at times. Amber Smith has written a novel that I think every teen should read (hell, everyone regardless of age). This is a book that should encourage a discussion about what to do if you find yourself in Eden's situation or if you suspect a friend is going through something difficult. I may have felt like crying while reading this book but I consider that a job well done by Smith. I know I've painted a picture of a very difficult read but it's worth it, my friends. So so worth it.

Also: If you want to check out another review, please read Tiff's at Mostly YA Lit. It's fantastic.

*An ARC was provided by the publisher, Simon & Schuster Canada, in exchange for review consideration. All opinions are honest and my own.*
Posted by Books Etc. at 7:01 AM

Email ThisBlogThis!Share to TwitterShare to FacebookShare to Pinterest
Labels: Amber Smith, cover, debut, rape, sexual assault, The Way I Used to Be, YA