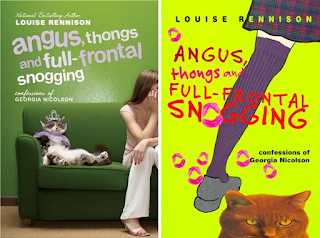 Last month the book world lost another author, Louise Rennison, the woman behind the fabulous Georgia Nicolson novels. These books were absolute favourites of mine when I was a teenager and I was so upset to hear of her death. I wasn't the only one. Jessica of The Paper Trail Diary, a friend and fellow blogger, decided we needed to reread the books in honour of Rennison. (Read more on the readalong here.) It's been years since I've read them and I never did finish the series. Book ten was published in, I think, 2009 which was when I was graduating university and not reading much YA. So, while I was sad to hear Rennison had died, I was happy to have the chance to reread her books. The goal of the readalong is to read one book every three weeks and we're discussing them on social media using #GeorgiaNicolsonReadalong, on our personal blogs, and on Goodreads in a special group.

For those of you who have absolutely no idea what I'm talking about, here's the synopsis of the first book in the Georgia Nicolson series, Angus, Thongs, and Full-Frontal Snogging:


There are six things very wrong with my life:
1. I have one of those under-the-skin spots that will never come to a head but lurk in a red way for the next two years.
2. It is on my nose
3. I have a three-year-old sister who may have peed somewhere in my room.
4. In fourteen days the summer hols will be over and then it will be back to Stalag 14 and Oberfuhrer Frau Simpson and her bunch of sadistic teachers.
5. I am very ugly and need to go into an ugly home.
6. I went to a party dressed as a stuffed olive.
In this wildly funny journal of a year in the life of Georgia Nicolson, British author Louise Rennison has perfectly captured the soaring joys and bottomless angst of being a teenager. In the spirit of Bridget Jones's Diary, this fresh, irreverent, and simply hilarious book will leave you laughing out loud. As Georgia would say, it's "Fabbity fab fab!"

I first read book number one when I was 13 or so. I don't remember exactly how I came across the books, but I did, and my best friend, her sister, and I devoured it and the rest of the books as they were published. I remember finding it hilarious at 13 and wondered if 28-almost-29 year old me would find it just as funny. Yep. I did. Of course, it was a little difficult getting into the mindset of a 14 year old again but I got there. I did kind of laugh when Georgia referred to her parents as "The Olds" because I totally would have agreed with her then but my view of my mom and step-dad is completely different now!

For the most part, I thought the story held up pretty well, considering it was first published in 1999. Teenagers really aren't that different no matter when they were growing up. I did notice, however, some issues that wouldn't fly with some teen girls today who are aware of feminist/gender issues. At one point Georgia talks about how embarrassing it is to have a dad who's emotional instead of handy. "Instead of DIY he talks about feelings and stuff. Why can't he be a real dad? It's so pathetic in a grown man." (page 17) I really hope that teen girls (and boys) these days realize that being a "real man" involves more than swinging a hammer and providing for his family. The other passage that made me cringe involved Georgia and her friend Jas walking up and down the main street in short skirts to see how many cars would honk. Teenage girls of today: Please do not do this. Wear the skirt because you like it, not because you want boys to stare at you.

The books are written in diary format so it makes it so easy to read. I blew through the first book in one day (I probably could have easily finished it in one sitting had I not had my sister staying with me for the weekend). I found myself giggling out loud and remembering how much fun it was to first read the book and talk about it with my friends. I don't think I had read many books by English authors before that point, certainly none with contemporary characters talking just like they would in England. (Let's not get into how certain books become Americanized.) I loved it because it exposed a whole new world to me - and a new vocabulary.

I know this is a pretty short review of Angus, Thongs, and Full-Frontal Snogging but I always find it hard to review a book I'm doing a reread of. Plus, it's 11pm on the night before I'm posting this and I'm exhausted! Coming up next for the Georgia Nicholson readalong is book two: On the Bright Side, I'm Now the Girlfriend of a Sex God (these titles just kill me). We'll be discussing it on April 12, along with the film version of Angus, Thongs, and Full-Frontal Snogging (which, if you can believe it, I've never seen) (Also, why did they have to change "full-frontal" to "perfect"? Ugh.). I can't wait! Now, I'm away laughing on a fast camel (you'll get that reference in a few books!).