I did it, friends. I finally made it to Book Expo America. (What I didn't do was post my recaps in a timely fashion. Ahem.) For those of you who don't know what BEA is, it's basically a giant book convention full of authors, publishers, and other bookish vendors and it's all around amazing. I've only wanted to go for the past, you know, four years or so. Every year I'd see so many bloggers talk about how great it was and I decided 2015 was the year it was going to happen.

Thankfully, my grandma seemed to be in a giving mood. (Seriously, I have the best family ever.) I was also even more motivated to go this year because the event would be happening the same week as my champagne/star/golden birthday. (28 on the 28th, baby!) How could I not go, right?

But before I could get there I had a lot of planning to do. Not only had I never been to BEA but I had never even been to New York City. I knew it would be expensive to stay so the first order of business was to find some roomies. After a few failed attempts at finding local-ish folk to stay with, I was finally put in touch with some of the Ottawa Bloggettes who would be attending. Luck was clearly on my side as the girls would be staying in an apartment that slept six and they only had five attending. Would they let in a girl who hadn't met most of them in person? Yes, they would! Accommodation: secured.

I quickly registered for the event and, after a long pro/con list for how I should get to NYC, booked my flight. I read up on what I could and could not bring with me to the show, and bothered Michele of Just a Lil' Lost with countless questions (thanks, lady!). I decided which authors I wanted to see in the autographing area, and tried to figure out what books would be given away, where, and when. At a quiet night at the library where I work, I read through a New York City guidebook and made notes on what I'd like to see when I was in the city (knowing full well I wouldn't have a ton of time to see the sights). I made pre-birthday, birthday, and post-birthday night plans. I also figured out that packing a suitcase within a suitcase would be the best way to get all of my books home (after I told myself, quite sternly, that I needed to be careful about how many books I needed to bring home). I signed up for the outrageous roaming package for my phone so I would be able to communicate with folks while in the States. I decided that driving myself to the Buffalo airport and parking there was the most cost-effective measure and found myself a coupon to park. My roomies and I decided that we would meet at the Newark airport and I would be the first one there.

I've been to the Buffalo airport before but because it involves a border crossing, I knew I needed to leave lots of time just in case it took awhile to get into the US. I also suck with directions so I needed some buffer time in case I got lost, too! (I did kind of get turned around...it's so confusing coming out of the crossing!) I got to the airport with plenty of time so I read at my gate while I waited. I have a messed up back so the last thing I wanted to do was wander the airport with a carry on and purse. It was close to my boarding time when a mild disaster struck...my flight was delayed by an hour. OK, not a big deal. I sent a tweet to my roommates but I would still get to the airport around the same time as they would so it was all ok. Time for tea, a disappointing muffin, and a postcard purchase for my sister. Back to my gate when everything went to hell in a handbasket...my flight was now cancelled. I don't travel much so I didn't know what number to call or where to go in the airport to figure it out on my own so I lined up with all the other chumps and waited for the not-very-nice attendants to help me. It took forever because so many people were only connecting through Newark. After silently cursing everyone and myself, and meeting a lovely couple who had just traveled through the Niagara region, I finally got myself a seat on a later flight. Yay? Bad news was I would now have to figure out a way to get from the airport to near the apartment on my own. Bit of a worst nightmare for this inexperienced traveler. But first, what is a girl to do with four hours to kill in an airport? 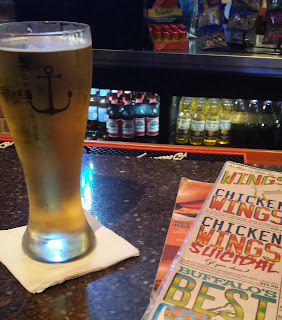 I needed to have some lunch and, damn it, I needed a drink. I sat myself at the bar and, a little while later, a ridiculously good looking guy sat a couple stools down from me. We started chatting and it definitely made the time fly. I may not be single but I wasn't about to turn down the chance to talk to a nice (looking) guy. (When I told my roommates this story they were all furious...I'm the only taken one in the bunch so it wasn't fair that I got to meet the hot guy!)

I finally made it to Newark, with a dying phone, and got myself on a bus shuttle that would take me to somewhere near the apartment where two of my roommates, Emilie of Emilie's Book World and Katherine of The Lady Critic's Library blog and Ms Lady Critic vlog, met me at a random corner so I wouldn't have to find the apartment on my own. These ladies are my saviors. Also, this happened to be at the random corner I was on:

After trying not to run people over, or get run over, we made it to the apartment. I dropped off my stuff, looked longingly at the plug that would charge my phone and the couch that would be lovely for my weary body, and headed back out into the world. First stop, Strand bookstore! Emilie and Katherine wanted a few books and I wanted to experience bliss the bookstore. I was also an exhausted sheep so they could have led me anywhere and I would have followed. The girls picked out one New Adult book that sounded great (Leaving Amarillo) so I bought one too. Then we hopped on over to the Teen Author Carnival. This was the first real indication that I'd be spending a bit of time on my own during BEA since I don't review, or pay too much attention to, much YA. So, while the ladies were getting their books signed, I watched over their bags and sat my tired ass down on the teeny chairs in the children's section of the library we were in. Here I finally met the rest of my roommates: Ciara of Lost at Midnight Reviews, Jessica of Read My Breath Away, and Kathy of A Glass of Wine. I also met Sarah of You Should Read This, who would be one of my birthday date buddies later on in the week. Had I mentioned my phone was practically dead? This meant that many people didn't know I had made it safely. I loved Michele's comment on this selfie Katherine snapped of us while at the event.

We finally, wearily, made our way back to the apartment - after a stop at Duane Reade for some supplies, including much needed alcohol - though the rest of the night is a hazy blur. No, not because of the booze. I could barely finish my Twisted Tea! I was just so tired. I had never been so happy to fall asleep on a pullout couch before in my life.

So that, my friends, was my experience getting myself to BEA. It was a hell of a time getting there but...I was there! I was in New York City! And what was I taking away from my experience? I am so driving to Chicago next year.

Up next...my first day at BEA. The one word I'd use to describe it? Overwhelming!
Posted by Books Etc. at 8:05 AM