Review: In the Unlikely Event 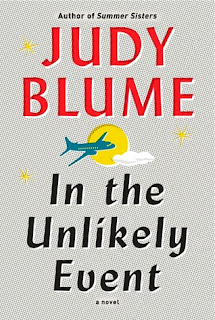 I have a bit of a confession to make...I didn't read a ton of Judy Blume books growing up. At least, not that I can remember. That didn't stop me from being excited about her new book though. She is a legend. In the Unlikely Event lived up to the hype, in my opinion, and is one book you'll want to get your hands on this summer.

In 1987, Miri Ammerman returns to her hometown of Elizabeth, New Jersey, to attend a commemoration of the worst year of her life. Thirty-five years earlier, when Miri was fifteen, and in love for the first time, a succession of airplanes fell from the sky, leaving a community reeling. Against this backdrop of actual events that Blume experienced in the early 1950s, when airline travel was new and exciting and everyone dreamed of going somewhere, she paints a vivid portrait of a particular time and place—Nat King Cole singing “Unforgettable,” Elizabeth Taylor haircuts, young (and not-so-young) love, explosive friendships, A-bomb hysteria, rumors of Communist threat. And a young journalist who makes his name reporting tragedy. Through it all, one generation reminds another that life goes on.

I think the only thing that would bother some readers is the number of points of view we get in the book. Miri is our heroine but each chapter features several different characters. Some, like Christine and Mason, have their perspective shared more often. But others may only get one chance at providing their POV. Once I got used to the way the story was told, I started to enjoy it. Except when I realized that, like I said, some characters are only featured once and that sometimes meant they were on one of the doomed flights. It's hard to read but it's an effective way to tell the human side of the story.

I enjoyed that this book was a historical one for me (I actually wasn't even quite yet born at the time of the "thirty five years later"!). Early 1950s America is not really a time period I'm familiar with since I'm Canadian and didn't pay nearly enough attention in history class (ever wish you could tell your younger self to smarten up?) to remember what it was like it my own country in 1951 let alone another. I liked that it was historical in the sense that it was a great story that just happened to be taking place in another era. I didn't find any of those moments where I was obviously supposed to be learning or needed the author to over-explain something that modern me just didn't get. Maybe that was due to the fact that it's recent history and quite similar today's world.

What I liked especially was that, amid all the plane crash horrors and everything else, Miri was going through the same things and having the same feelings as all teenage girls have. She's having the rush of feelings that accompany your first love - the giddiness, the insecurity, the "how am I supposed to be feeling and acting?" questions - that all of us should be able to identify with. She's also learning how to deal with situations as an adult - how to analyze them and how to think for herself and come up with her own opinions - but she's still being stifled by authority figures. I really liked the coming of age part of this novel. It especially helped that I adored Miri!

This was actually a really hard review for me to write. In the Unlikely Event is a book that makes it hard to explain why it's so good. Sure, I can say the writing is excellent and it packs a crazy emotional punch, but that doesn't quite do the trick. I wish I could just shove the book in your hands and say, "Read it!" and be done with it! I do hope that what I've managed to cobble together here has convinced you to pick up Judy Blume's new book. In the Unlikely Event has a story you won't soon forget.

*A copy of this novel was provided by the publisher, Doubleday Canada, in exchange for review consideration. All opinions are honest and my own.*
Posted by Books Etc. at 8:44 AM