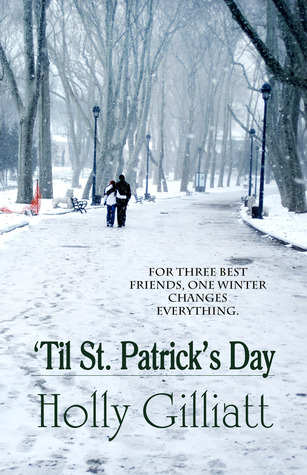 I had no idea what to expect when I picked up 'Til St. Patrick's Day. I had been meaning to read Holly Gilliatt's book for months and I had since forgotten what the book was all about. Since I don't reread the synopsis before diving into a book (review or otherwise), I was going in essentially blind. I was expecting to be totally surprised with the story but I ended up predicting almost every single thing that happened in the book. I don't know if it's fair but that is the only reason I didn't end up loving this book. It's good, don't get me wrong, but it was missing the wow factor that I needed.


For three best friends, one winter will change everything.
Chronically optimistic Jayne is surprised she's still single at twenty-eight. But as always for Jayne, there's hope. This time his name is Gray--a successful, gorgeous marketing VP that she can't believe is going out with her. She's never given up on the belief that the right man for her is out there, somewhere. Maybe Gray could be the one...if she just works hard enough to make it happen.
Her cynical friend Karen is suspicious of Jayne's new guy with his model looks and over-inflated ego. She's concerned for Jayne, but has her own relationship to worry about. Not that anything's wrong with her boyfriend. He's actually perfect for her, which is why she's terrified. Not sure she can ever fully trust a man again, she considers bailing on yet another relationship.
Claudia is always there for her friends, no matter what they're going through. She mothers them like the children she craves to have, relieved she's no longer navigating the dating world. Happily married, Claudia can't wait until the day her husband finally agrees it's time to start a family.
'Til St. Patrick's Day is a novel exploring the depths of friendship and what happens when love doesn't go according to plan.

Like I said, I was able to figure out almost all of the plot points as I was reading the book. I always say that I don't mind if I have an idea what the ending is as long as the journey there makes for a good read. In this case, I needed a great read to be able to get over the fact that I figured out everything. It was just too predictable for me.

The other thing that I didn't love was the characters themselves. I did love that the story focused on three best friends but I didn't really click with any of their personalities and I like to like the characters when I'm reading a chick lit book (or, really, any book). Jayne was being too much of a doormat, Karen was being too much of a bitch and letting her daddy issues affect her too much, and Claudia...well, she was kind of boring (I think Bridget Jones would have called her a Smug Married). I'm sure they'd all be delightful women to get to know but I was missing something with them.

I know this seems like a downer review but this wasn't a bad book. Trust me! I may have given it a three star review on Goodreads but the average is over four stars. That's great! I think what this book has going for it is that the things the three friends were going through were totally relatable. Unfit partners, commitment issues, infidelity, among other things, are all things most women have gone through themselves. Or at least have had a close friend who's dealt with something similar. These characters were real...which mean they weren't perfect. I may like to like the characters I read about but I definitely dislike reading about perfect characters. That's just unrealistic. I liked that Gilliatt's characters were real women.

Overall, 'Til St. Patrick's Day was a lovely read. It's light without veering into fluffy territory and it features three very realistic characters. Pick up Holly Gilliatt's novel if you're looking for a quick and enjoyable read.

*A copy of this novel was provided by the author in exchange for an honest review.*
Posted by Books Etc. at 7:14 AM