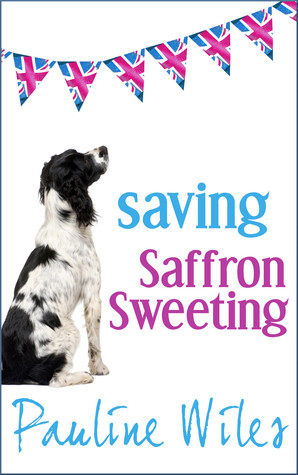 A week ago I realized I hadn't yet read a chick lit book in 2014. I decided to finally read Saving Saffron Sweeting because it had been sitting on my Kobo for months (bad blogger). I'm kicking myself for not reading it sooner! I thoroughly enjoyed Pauline Wiles' novel. It was so fun and cute and British!


Grace Palmer’s British friends all think she’s living the American Dream. But her design business is floundering and when she discovers her husband is cheating with her best client, she panics and flees home to England.
The tranquil village of Saffron Sweeting appears to be a good place for Grace to lick her wounds, but the community is battling its own changes. Reluctantly, Grace finds herself helping her new neighbours as they struggle to adjust and save their businesses. However, not everyone has the same opinion on what’s good for the village. The charismatic new man in her life may have one speculative eye on Grace, but the other is firmly on profit. How will she navigate the tricky path between her home and her happiness?
With gentle humour and generous helpings of British tea and cake, Saving Saffron Sweeting explores one woman’s need to define herself through her career and community, before she can figure out who should be by her side.

I adored Saving Saffron Sweeting. I loved Grace, I loved the town, and I loved Mungo the dog, who repeatedly showed up at Grace's cottage. I'm a sucker for small town stories so I really loved the 'save the town' aspect of this novel. It was a lot of fun to see the ideas that Grace came up with and I was happy with the reception she received.

What stood out for me was how British the novel was without it being in your face English and confusing. I love reading books set in Great Britain but sometimes there are obscure (to me) words that just confuse the heck out of me. In the case of this book, Wiles does a fabulous job of subtly explaining word choices. I think that's because Wiles moved from England to California, just like her main character, and likely understands the language barrier than can sometimes exist between Americans/Canadians and Brits. There were lots of British terms and such that were sprinkled throughout the book and I loved it. In one particular scene a few different British chocolate bars are mentioned (Side note: Americans, do you not have Crunchie bars? You are seriously missing out if that's the case.) along with Coronation Street, Doctor Who, and red plonk (aka wine).

I had a sense of what would happen in the end but I really didn't know how that would eventually end up happening. Since I couldn't see a clear answer I was happy to read along and see where Wiles would take the story. How would Grace realize who she was supposed to be with? What would happen with the town? Would she stay in the town? (Oh, how I hoped she would!)

Speaking of the journey towards the end of the novel, I really loved watching Grace grow as a person. She had a lot to figure out about herself before she could decide who she should be with romantically. I also liked that this wasn't your typical sort of 'a woman is scorned and goes off to sulk somewhere and is swept away by another man.' Sure, there were elements of that but Grace and her work played centre stage. That work, and the town, ultimately proves to be most important.

I don't know if my review has given Saving Saffron Sweeting justice but I hope it has. It was so incredibly enjoyable. If you're looking for a British chick lit story you can really get into, check out Pauline Wiles' debut novel. I think you'll like it as much as I did!

*A copy of this novel was provided by the author in exchange for an honest review.*
Posted by Books Etc. at 5:28 AM