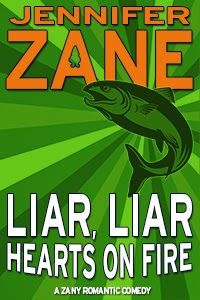 When author Jennifer Zane first contacted me to see if I would review her latest novel Liar, Liar, Hearts on Fire, I had no idea what to expect. I went into reading this book with no expectations and I was blown away by how amusing and interesting it was. I liked it so much that I read it in virtually one sitting!


Violet Miller is a teacher savoring her summer break until she's been called in as emergency reinforcements—of the dating kind. She volunteers to help an old flame by pretending to be his girlfriend. In Alaska. At a family reunion. Since the guy is a handsome, lumberjack-sized doctor she's never quite forgotten, faking a relationship won't be hard work.
Mike Ostranski is a desperate man on vacation. His mother wants grandchildren and sees a crazy Alaskan woman as a candidate for daughter-in-law. Mike needs Violet by his side to deflect the lady's advances.
A week in Alaska as boyfriend and girlfriend should be easy for them. They grew up together, even had a brief fling. What could go wrong?
Everything.

The first thing I have to address is the fact that this is actually part of a series...sort of. It's one of those "same world, different main character" series that you don't technically have to read in order but things make a lot more sense if you do. I felt like I missed out on the meaning behind other characters' lives and their relationships because I hadn't read any of Zane's previous work. I mean, it didn't really matter and I was able to figure out what had happened previously, thanks to brief descriptions of the past, but I think I would have liked to know how this world came to be, you know? And what features in every novel. Does George the Gnome show up in every book? Goldie? (Reading the synopsis of the previous novels tells me yes, they both show up in the other books.) So, start with Gnome On The Range and work your way up to this one because it's so enjoyable!

I think the cover description, "a zany romantic comedy", is bang on. Zane has created some great characters and outrageous situations for said characters. I felt so sorry for Violet and Mike as they had to deal with the lies Mike created just to keep from hurting his mom's feelings. There are so many crazy antics in this book but it totally worked - overly amorous French twins, an uncle who's going off to take part in a Civil War reenactment, a neighbour who likes to show up (naked) unannounced...you know, the usual. Even with all the craziness, I liked that Violet and Mike's relationship stayed centre stage.

Speaking of the relationship...I was totally rooting for the two of them to smarten up and realize they each had real feelings for each other. It was so obvious - to everyone else! (And the twist at the end - which I loved - proves that.) I so wished they had realized their feelings sooner because they had spent eleven years apart! In the end, though, everything works out as it should and I was really happy with how Zane wrapped things up for the couple.

The only real negative I have with this novel (and why I didn't give it a five star rating) was the mystery aspect to the story. I understand that Zane always includes a mystery in her books and I'm fine with that but the mystery in this book, which isn't even mentioned in the synopsis, seemed like it was just added in after the rest of the novel was written. I'm not sure what, exactly, Zane could have done to make it better but I wish the mystery was woven in more with the rest of the story.

Overall, I really loved reading Liar, Liar, Hearts on Fire. I think if you like books by Janet Evanovich, particularly her Stephanie Plum series, you'll love Jennifer Zane's series. It's funny (sometimes literally laugh out loud funny), sexy, mysterious, and just plain fun. I think I might have to make time to go back and read the first few books in the series!
Posted by Books Etc. at 6:52 AM