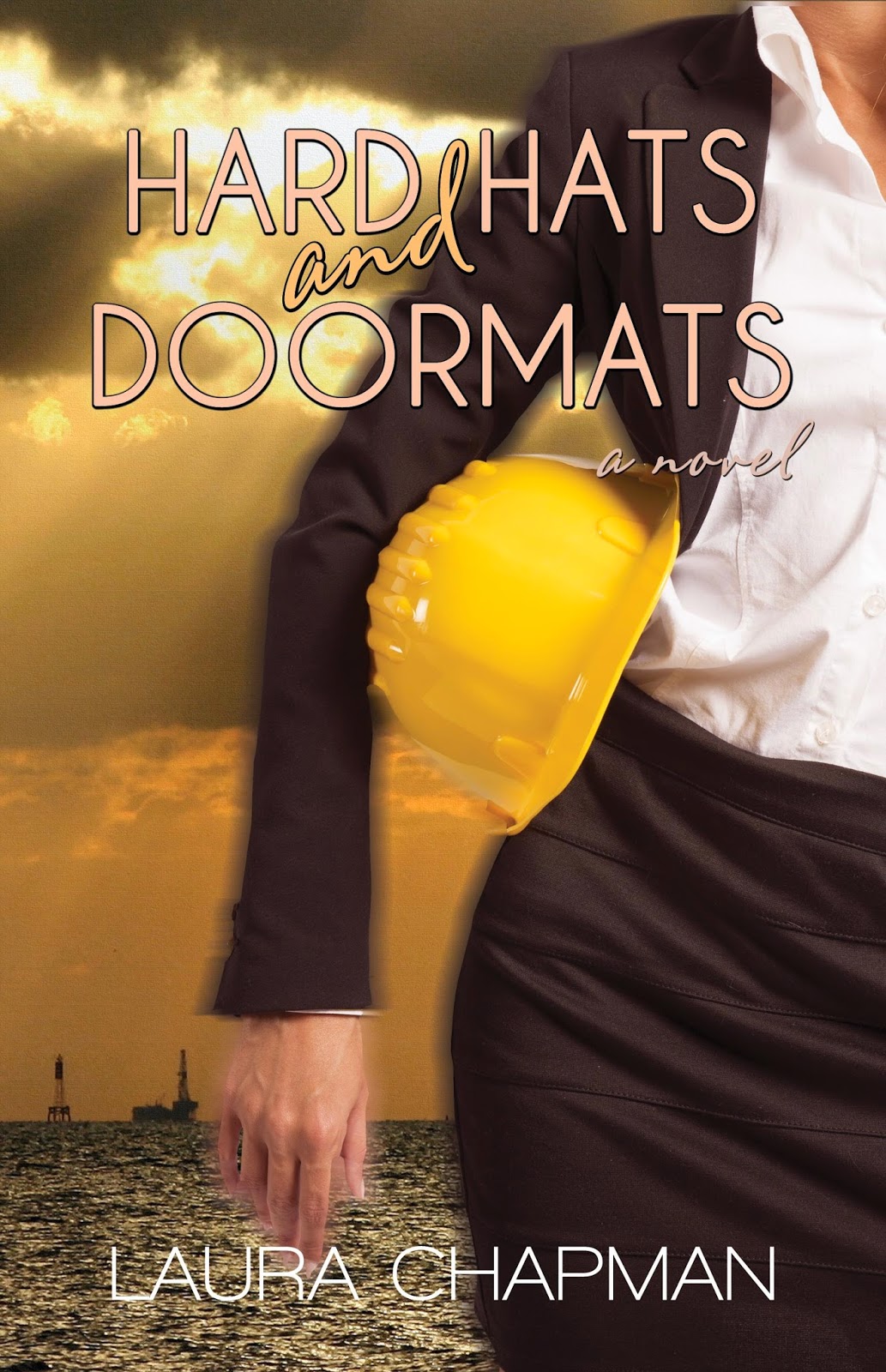 You know that feeling you get when you're reading a really great book and you don't want it to end? I got that feeling when I read Hard Hats and Doormats, the debut novel by Laura Chapman. It was that enjoyable and that good.


Lexi Burke has always been a stickler for following rules and procedures. As a human resources manager for a leading Gulf Coast chemical company, it’s her job to make sure everyone else falls in line, too.
But after losing out on a big promotion–-because her boss sees her as too much of a yes-woman––Lexi adopts a new policy of following her heart instead of the fine print. And her heart knows what it wants: Jason Beaumont, a workplace crush who is off limits based on her previous protocol.
While navigating a new romance and interoffice politics, Lexi must find the confidence to stand on her own or face a lifetime of following someone else’s orders.
Who says nice girls have to finish last?

Confession: Laura and I are virtual besties. We've been calling ourselves that for awhile now, so long, in fact, that I can't even remember exactly what it was that made us declare ourselves besties. The virtual needed to be added because I'm in Ontario and Laura lives in Nebraska. So, because we're so close, virtually, I immediately signed up to be part of the CLP Blog Tour for her debut novel. It gave me such a thrill to know that her book was being published. I was proud of her! So, some may think I'm biased, but I think anyone who reads this novel will love it just as much as I did.

I can't remember the last character I read about that I loved this much. I desperately wanted to be Lexi's friend. I loved her personality and I totally related to her. That actually wasn't really that hard because we have a lot in common, including being in our mid-twenties. I completely understood her frustration at her job and wishing she had more choice in careers. I can relate as we're still at the point where any job is better than no job thanks to the brutal economy. I liked that she and her friends would go out to pubs to have a few drinks and hang out instead of going out clubbing. That's what my friends and I like to do, too. Sometimes we get incredibly drunk, like Lexi does on occasion, but sometimes we just go for a few and have a good time, again like Lexi does sometimes. Chapman did a great job of accurately portraying the lifestyle of a twenty four year old (not surprising since she's also in her twenties) and I really appreciated that. I don't know if I can really explain it but I really did want to be besties with Lexi and, by extension, her BFFs. When that happens with a character the book is a winner for me.

I also loved that this novel was funny. It's not a comedy but Chapman wrote characters who were smart and witty. They also got themselves into some interesting conversations, there's a misinterpreted line about crabs at one point, that had me laughing out loud. Then there was this scene (warning, swearing is present!):

I think part of what made this so funny is that my boyfriend is a journalist and I had just made a comment similar to this to him the night before reading this book!

There was only one little thing that I wished had been different in this book. There were a few occasions when I felt like I was missing out on events and conversations. Unless I missed something, the first weekend Lexi and Jason spend together isn't written about. The second weekend is but I feel like that's just not as important as the very first time they spend together. The second, third, and so on could be glossed over but not the very first time they spend significant time together.

I loved the romance in this novel. OK, fine. I loved Jason. He might be my book boyfriend of 2014. There was just something about him that made me swoon as much as Lexi did whenever he was around. I appreciated that the romance wasn't the only part of the story. This was helped along by the fact that we knew right away who Lexi was interested in. Instead of a book full of "will they or won't they?" we get part of that and part of watching the beginning of a relationship. It was a really nice balance.

Other little odds and ends: Lexi named her work phone and I found that ridiculously amusing. I also loved every character name in this book. Lexi, Jason, Brenna, Kara, Cameron....all great names!

As I write this, Hard Hats and Doormats is my favourite book of 2014. Laura Chapman has written a fabulous novel and I think so many people would enjoy as well. Check it out!

Make sure you check back here in the next few days as I have an awesome guest post from Laura coming up on February 3rd and a Q&A with the author herself on the 5th. While you're waiting, check out all the other reviews and posts that are part of the CLP Blog Tour!

*A copy of this novel was provided for the blog tour in exchange for an honest review.*
Posted by Books Etc. at 5:58 AM